Well many of us are missing social interaction of gaming and are trying to find ways simulate that exerience. Last saturday Dave Valinten hosed a fun game his Devil in the Wilderness. 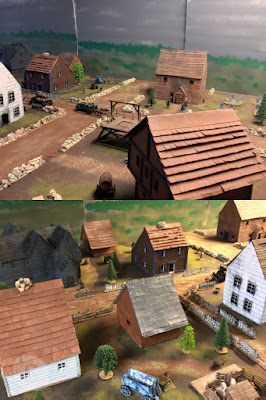 Dave had good set up using with two cameras and a computer aided system for rolling dice.  Its quite a setup he calls it Aplication of Force and it worked really well.  There were some issues with the same random events popping up a little too often. We played cooperatively with Dave as GM and his son playing the bad guys. 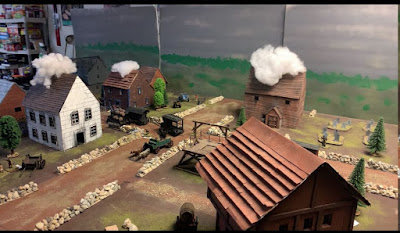 The forces of civilization were able to hold off those of darkness even though the town seemed to be spontaneously combusting around us!  Inspired by Dave and itching to get in some more Black Seas I arranged to meet electronically with Frank and teach him the game. 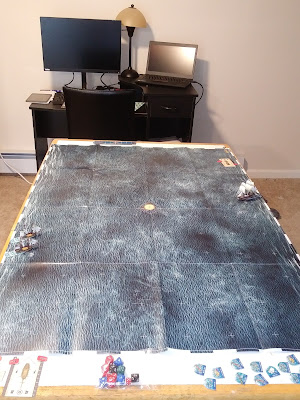 My own set up is less sophisticated than Dave’s but I did have two cameras’ with laptop providing the second one. 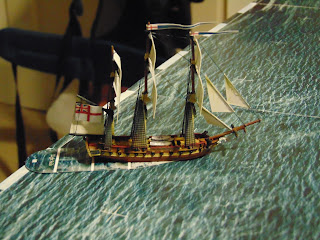 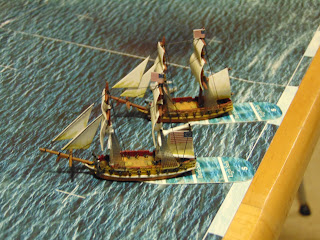 I ran the US privateers Brigs Sea Hawk and Rattler. 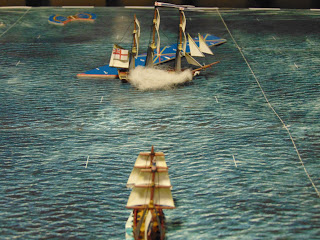 Frank started with the windward position and I tried to get to cute working a ship to either side.  Frank got a raking position on the Seahawk and knoked away several spars. 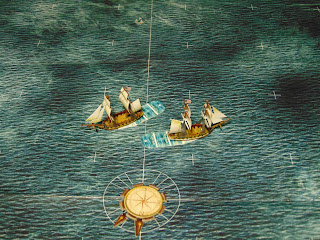 My ships got too close to each other in my efforts to bring them back together and collided.  At this point my camera batteries gave out and the recording of the battle didn't take (anyplace I can find it anyway).  The Unicorn hit the Seahawk hard with its next broadside and forced it to strike.  The Rattler managed to hit Unicorn several times but was also hit in turn by the Unicorn.  If the collision hadn't happened, I might have been OK but Franks heavier ship had a clear advantage and his last broadside reduced my ship to swish cheese (only less buoyant).
Posted by AdamC1776 at 8:04 AM

Email ThisBlogThis!Share to TwitterShare to FacebookShare to Pinterest
Labels: Aplication of Force., Black Seas, Devil in the Wilderness, Remote Gaming