Still got lots of miniatures for sale over at my eBay store.

Chaco Wars figures from Orinoco Miniatures
I'm Thrilled to have sold these to a gamer in Paraguay these troops are basically going home!

Pop over to the store and see if there is anything you like: http://www.ebay.com/usr/fencingfrog1776
I'm planning to add some more next week.
Posted by AdamC1776 at 8:50 AM No comments:

Not a lot of gaming of late with life in general just getting in the way but John (who's had his own blocks to gaming) available for a game we opted to General de Armee. 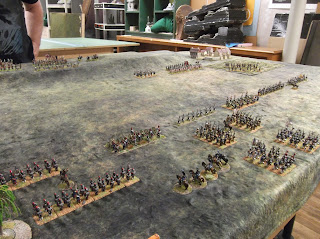 John took the British and I the French lining up to take Vimeiro hill.  My intention was have my elite troops on the left demonstrate against the hill while my Veteran grenadiers (right) and line troops (center) attacked the British Brigade to the right. 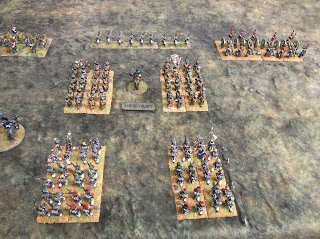 John and I both had one hesitating brigade. Mine was in the center 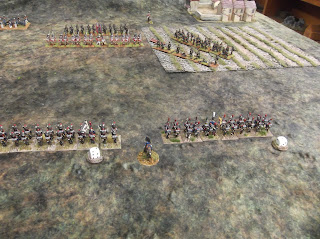 John advanced on my right so with my support in the center hesitating I opted to receive the attack.  rifle and artillery fire did minor damage 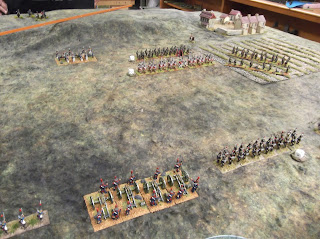 My 8 pounders exacted some damage of their own. 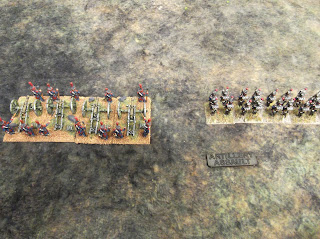 The Next turn with John advancing I opted to use the Artillery Assault special order .. 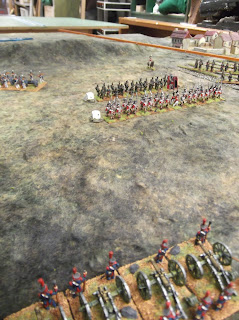 Punishing the Scots and 95th as they approach 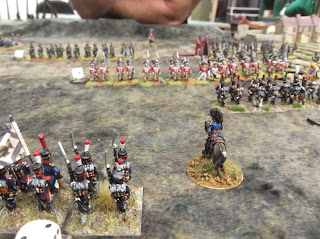 I advanced my right most unit of Veteran grenadiers and the Scots attempted to charge home. We got a close range fire fight that hurt both units. 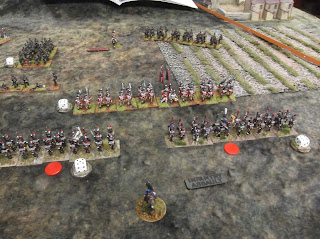 I attempted a combined attack on the Scots who punished us with a text book blast of fire and my left. 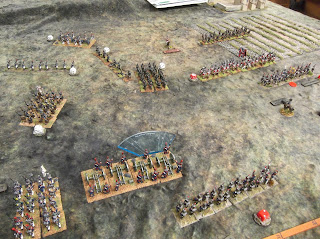 My efforts to concentrate and crush John's left are not looking good as my center hesitates again. 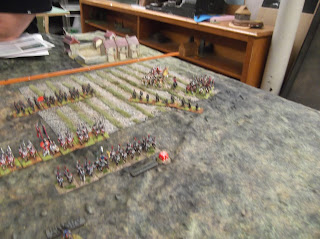 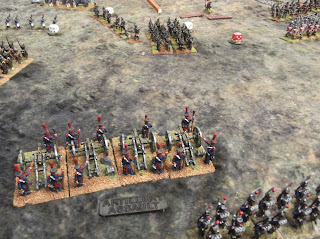 This was the only real question/issue that came up my artillery is ready to blast the 95th but as bets we could tell they can charge the grenadiers to my right without taking any fire.  This seems odd.  I understand the desire to to have every one take shots at the approaching attacker as if calling in time on target but the ability to ignore the guns entirely seem equally suspect 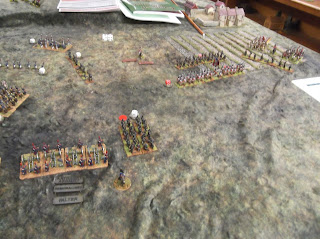 Johns attack rolls up my right and I decide its time to start the withdrawal the English hold the hill.   I liked the set of rules a lot and John was nice enough to get me a copy of these rules and their ACW equivalent as a "baby shower" gift.  I'm very grateful to have the chance to read them in full.  This was not one of my better games, I was a the low side of the bell curve most of the game while John was dwelling at the high end.  The result was a crushing English victory but still a fun night of gaming.
Posted by AdamC1776 at 7:49 AM No comments:

I've been quiet lately between baby preparations, house hunting a friend's wedding, work and life in general I haven't had much time to paint.  Ariana's pregnancy is going well but my poor wife is exhausted and I have been handling some of the tasks she normally takes care of so she can focus on growing our daughter (its tough being a dad but tougher being a mom) 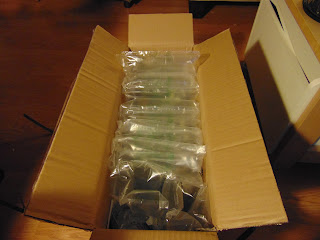 Well about one week ago a big package was dropped off at my office (I have all large packages delivered there as a precaution). This package was a long time coming Bones III launched in the spring of 2015. Reaper promised (or projected) delivery last August and for a while it looked like every thing was running smoothly until they discovered that items they thought were listed as complete by the manufacture in China were actually just "scheduled" or something like that.  From that point on Reaper (or its partner in China) got increasingly vague about how much was done etc. Reaper did a good job communicating and took the blame but honestly much of my enthusiasm for this set of miniatures and goodies as sort of dissipated.  Any way lets take a look. 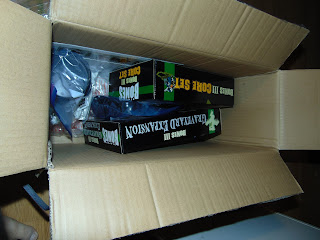 Lets comment on the excellent packing job here (thanks Mac!) lots of padding and two separate boxes.  Yes several pieces were a little bent form being stuck in the box but they straightened out nicely after a dunk in boiling water followed by a plunge in cold water. 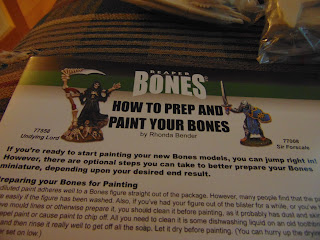 Granted not every one needs this but they included a nice little booklet regarding how to paint your Bones. 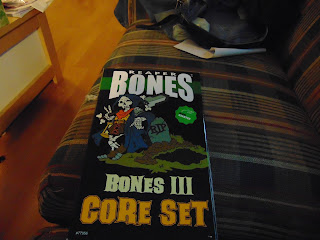 The core set, man they packed a lot of miniatures in here.  I'm sure I'll use a good number of them for Frostgrave and Dragon rampant.

Man they crammed a lot of miniatures into that box!  Lots of them will see use I am sure.  The Yetis will probably be on my first to paint list.  The Lizard men will make a fine Dragon Rampant unit as will the Ogres. 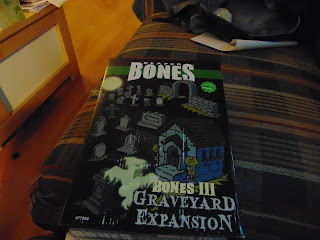 I also got the Graveyard expansion for the excellent terrain and constructs (for Frostgrave) the undead will come in handy too.
you can check out a video of the set Reaper made.  One cool change the crypt/temple and walls are actually made form a new gray harder version of bones its very nice.  Only complaint I have is its hard to remove the roof quickly for easy game play.

Th stone circle was a must have for me as soon as I saw it.  Great terrain piece for so many games.  It breaks down into 4 pieces so you can pack it away easily and/or scatter the pieces around the table if you want. 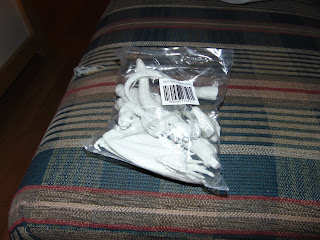 Another must have add on for me was the dragon Mathrangul he came in pieces and I was impressed that none had deformed in the slightest. 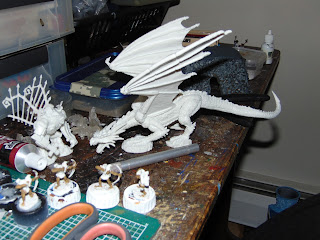 You can see him put together here with the grave golem form the grave yard set. you can see some more pictures here 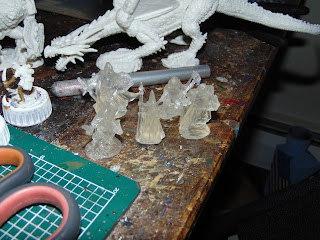 Another nice item from the set is the 5 "invisible" figures they are table ready and will probably see some use in Frostgrave before to long. Buying figures and getting them almost two years latter was a frustrating experience. One factor for me was it kept me from picking up other smaller purchase because I knew someday I would get a big box of miniatures and that one of them would probably be just as good.   I did Bones II in a small way and went big with Bones III I probably won't do Bones IV.  Bone II had its problems and similar (not identical but similar) problems surfaced in Bones III.  They came down to the supplier in China not being reliable when it came to communication and fulfillment on the planed time line.  I fully expect every kick starter to be late, when they said August I figures I would get them in time for Christmas.  I have a high opinion of Reaper as a company and I will continue to patronize them but they don't seem to have a handle on their Kick starters.  I might change my mind if I get WOWED by the stuff in Bones IV but for now I have plenty of stuff.
Posted by AdamC1776 at 7:22 AM No comments: