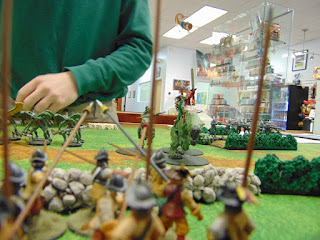 Given how much my local group has enjoyed playing Dragon Rampant I suspect that my Pikeman's Lament army is going to find it self facing fantasy opponents on a regular basis.  One could simply use Pikeman's Lament troops as Frank and I did in our last game.  That said it seems to me that by mixing and matching you can probably get a game with more flavor.

Cavalry:  The fewest changes are needed here.  Troops that charge straight at their foes are Gallopers, those who seek to disrupt with shooting then strike are Trotters and those that prefer to skirmish are dragoons. 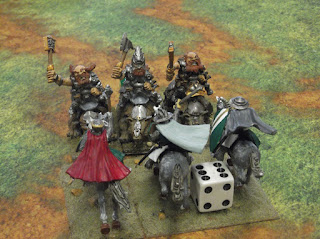 Dave's mounted Dwarves(facing my knight above)  could be classed as Gallopers, Elite Gallopers or Aggressive Gallopers depending on his preference. My knights could be counted the same way.  I would give cavalry armed with bows a 1 point up grade giving them a ranged attack of 6+/Range 12" hitting on 5+ but they would loose counter-charge (this could not be combined with Aggressive).   That said Bow armed troops might be just as effectively portrayed using the dragoon profile but there could be some special cases, like Centaurs or High Elf cavalry in a fantasy setting.

I might consider making Wolf/warg riders (especially if they have spears or javelins) trotters, since they might not want to charge a unit of armored humans or elves head on but would be quick to strike if they sensed weakness.

Dragoons and Light riders are pretty much synonymous you could bring over the sort range missile modification if you really wanted to.

Fantastical rules: Any for Gallopers and Trotters.  Dragoons are bared from Spellcaster, summoner and Cleric/Slayer.

Infantry:
Forlorn Hope works for most Elite infantry.  The fact that Pikeman's lament assumes a shooting characteristic for elite infantry actually makes it better from most points of view.  If you want to portray heavily armed Melee beast you just take aggressive and you get better "armor" and lose the ability to shoot.  You can add Any of the fantastical rules to Forlorn Hope.

I would retain Elite infantry for large Fantasy beasts. When/if my Bones III dragon ever get here I pan to use Elite Infantry+Fly+Missiles for a 10 point total to portray him.  I feel it makes sense to start the Higher Armor/Stamina for these troop types and then add a shooting ability if its warranted.

Pikemen: OK now we get to the signature unit of Pikeman's Lament.  Depending on how you build them the are a lot like either Heavy Foot or Light Foot.  The Reach of the pike is a major part of the unit profile but for me the key difference is the close order special rule  that really distinguishes them form other melee focused infantry.  To that end I would suggest you use this troop type not just for troops armed with long pointy sticks but for any fantasy combatants that are considered highly disciplined. Dwarven infantry with their tendency to form tight formation and drive into their less disciplined foes could be portrayed as Pikemen.

Use Heavy Foot with the Offensive upgrade for units like Orc/hobgoblin swordsmen, trolls, ogres and other fantasy types that just don't have the pikemans discipline.  You could use the pikeman profile if you want but I think they will work better using the DR unit Profile.

The Light Foot profile can be used with the Offensive profile for lightly armed troops like Goblins or Hobbits.  I also think there is merit to holding on to the light foot with with the mixed weapons profile.  This might be good for portraying units with uneven equipment or even local militia with training better than the typical club men.

Heavy and Light foot can also be used to portray historical troops that are not typical of Western Europe that don't really fit the Tribesmen  profile.  Janissary, Mameluke and the soldiers of the Mughal empire come to mind (from my casual reading not focused study).

The above should be eligible for any fantastical rules upgrade.

Tribesmen can replace Bellicose Foot. You might want to bring over the "Terrifically Shiny Armor" upgrade for dwarf berserkers or other hard to kill types.  They can have any Fantastical rules except Spellcaster, Summoner and Cleric/Slayer

The Shotte Profile should be used with all long range missile weapons yes bows have a greater rate of fire but Muskets have more penetration and knockdown power against armored targets call it a wash.  Use the First Volley rule for all missile troops while muskets are know for their tenancy to miss fire bows can also become broken and men may run low on arrows slowing their rate of fire.
They can have any Fantastical rule except spellcaster and cleric/slayer

Skirmishes can replace Scouts as there is little or no difference. They can have any Fantastical rules except Spellcaster, Summoner and Cleric/Slayer.

Ravenous hordes should be used for undead and other fantastical troops types of little skill.  They retain the fantastical option undead, venomous, hatred and fear.

Otherwise scratch forces for local defense should use the Clubmen profile.  Fantastical Rules are not appropriate to Clubmen

These are my thoughts for combining these two closely related games  I would appreciate your thoughts on this subject. I'll share my experiences as I get in games.

So my readers I have another bunch of figures I am selling.  They do have some wear and tear a few broken bayonets and muskets.

They are painted to a good gaming standard

I these strike your fancy you can bid on them here: Fencing Frog Ebay 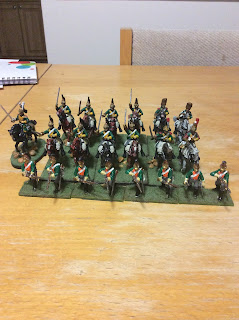 I'm selling a unit of Napoleonic French Dragoons the set includes an officer and 12 mounted troopers (two to a base) and 8 dismounted dragoons.  Selling on Ebay.
Posted by AdamC1776 at 7:40 AM No comments: