This Game took place on 1/18 but I haven't been ablt to write it up until now. 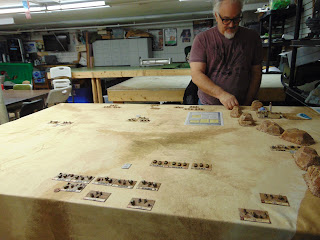 John and I continued our Rommel mini-campaign picking up more or less were we were at at the end of day two .  The Germans have lost many troops but have on of the British objectives and the British hade lost all there cruiser tanks. 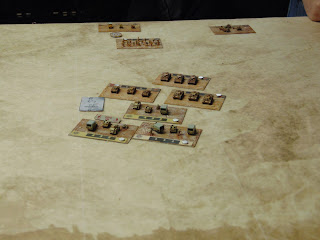 John starts off with a bid at Fort Capuzzo the Guards men throw it back... 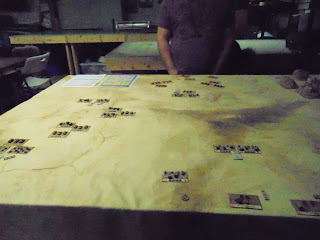 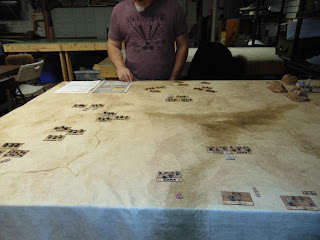 I start moving on the left flank hoping to lure John off the captured objective. 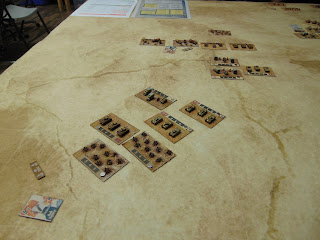 This works but neither side gains an edge yet.  I had poor operations dice early on limiting my flexibility and initiative.  John made good use of this time launching several spoiling attacks. 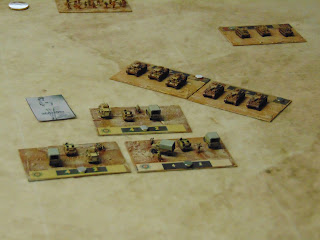 The Guards are finally plowed under after 4 turns of repeated attacks.  I just wasn't able to get men up to support them quickly enough . 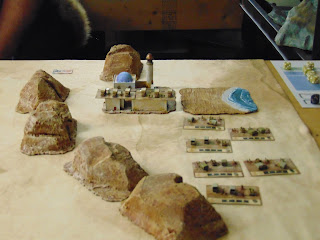 The 4th Indian division has moved up to strike at the town.. 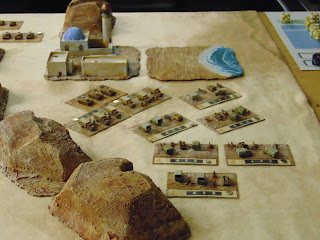 John launches a spoiling attack... I drove the Germans back but lost some strength doing it. 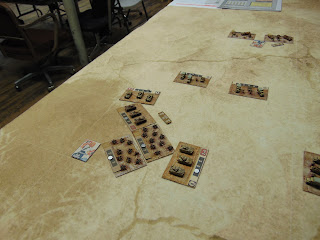 The skirmishing on the left flank continues with John getting the better of the fighting. 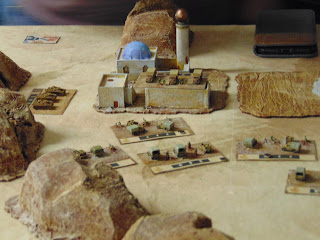 Waves of Indian soldiery crash on the the German defenders grinding them down "western front style." 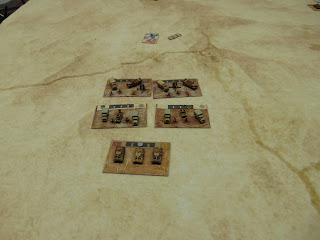 John catches some of the Desert Rats between his men but... 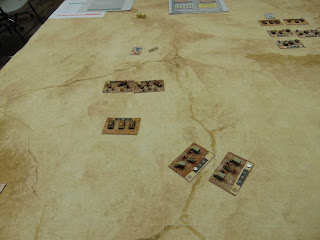 Cleaver use of the withdrawal tactic saves the men and has John spending valuable operations dice. John gets reinforcements to the coastal town of Sollum just in time but the Indians are making progress... 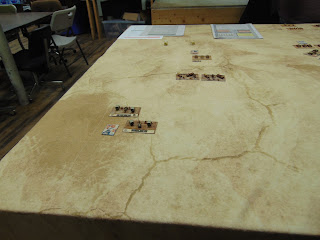 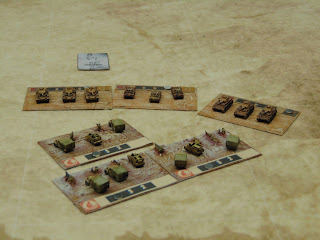 The Desert Rats make a push at fort Capuzzo but are turned away by German Panzers. 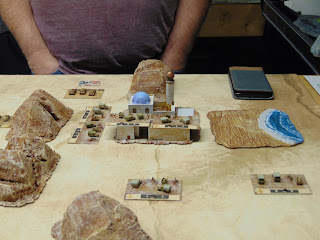 The Indians take the town and move to hold the pass against a counter attack. 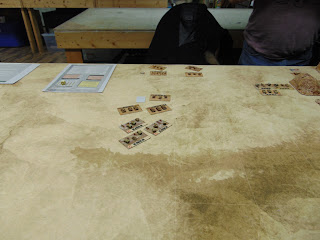 John has a lock on Fort Capuzzo and two other objectives... 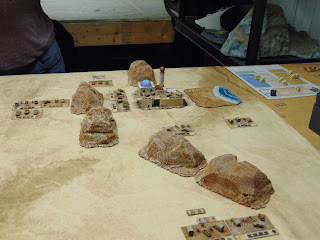 I now control the whole coastal rout though John still has the exit tot he interior under his control.  This is a German victory though the British avoided a defeat as significant as their historical one our lock on Halfaya (which John never go near) and our capture of the Sollum would probably men the British would have persisted (though both side would be hard pressed to continue operations without a pause).  A fun Series of games even if I was on the loosing end of both.  I think the author has the balance of forces right One on One fights tend to go the Germans way though not quickly.   The average British formation ratting starts at 4 while the Germans are a 5 on average.  Fights tend to go several turns as fights between full battalions of men and tanks should.
Posted by AdamC1776 at 7:01 AM No comments:

Tomorrow see the launch of the first Kickstarter to really get me excited in a long time.  Annie Norman (AKA Dice Bag Lady) is doing a kickstarer to expand her shield maiden line of practicaly dressed Norse warrior women. 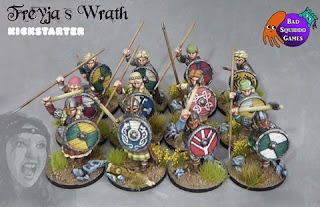 In addition to armored lasses like these above there will also be a number of women dressed in ordinary clothing with Spears, swords, and axes.  Perfect for your home guard troops in any game set in the Dark Ages/medieval period.  They should have lots of fantasy application too.   Even the rank and file troops are individually designed and sculped, so each can be a different character. No same guy new hat here as sometimes happens with even the best miniature sets.

There will also be lady slingers, and archers even crossbows OK Vikings with crossbows are a bit of a stretch but they work for other parts of Europe (and later periods)

One of the other things I'm looking forward to is the animals.  So far we have seen bears, beavers, moose and ravens.  There will be a just the animals pledge levels (so even if you don't like shield maiden's this is worth checking out).   I plan to make the mama bear and with the cub riding her back into an Christmas ornament for my wife. (hopefully she won't read this post LOL)

There will also by some mythical figures a Valkyrie, a Seer and some goddesses Freyja and Hel have been mentioned so far. At the moment there is no link to the Kickstarter but I will add one when its available. Annie’s work is all top notch I own several of her "Gen 1" Shieldmaidens and they are top notch. Please consider supporting what I think of as the best one-woman operation in Wargaming.  Link is now avaible: Freyja's Wrath

The past few days have been about taking care of both of my girls First Evelyn and then Ariana have been sick.  I've gotten in some brush time including my first Bonus Round entry please give him a vote.
I had something in mind for this round but it hasn't really come out the way I liked it so I'm calling an audible and using another miniature that might fit the theme. 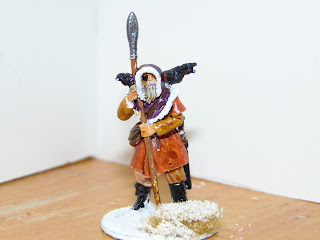 This is Odin form Footsore Miniatures a bonus mini they threw in with all orders over a certain amount in December (extended to January if you like him). 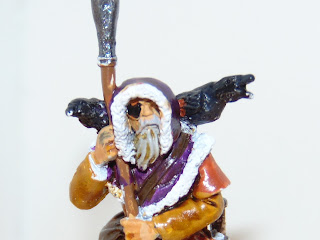 Odin himself can fly with the help of an 8 legged horse but that's obviously not here. His Ravens "Hugiin and Muninn" are and they are my connection to the theme. These Ravens (or all Ravens) were said to fly over the earth bring back tidings of what passes in the mortal realm to Odin. 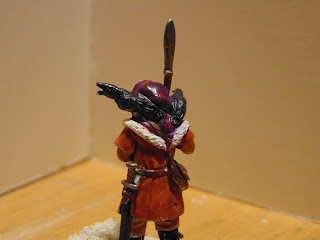 I went with a reddish coat in part because I saw this article about Santa and Odin being the same guy so the color seemed seasonally appropriate but still with in the reach of period dyes (and I like the color) I gave him a purple hood since to indicate this is a someone special (if the eye patch and two pet ravens don't give it away). I'll probably use this figure as a War Band leader for a Viking force though he would make a great Frostgrave wizard too.
Posted by AdamC1776 at 8:19 AM No comments:

Well the past few weeks have provided far too little brush time and and far too much quality time with my snowblower.
Despite this I have two entries into The analoge Hobbies Painting Challenge My point total so foar 27 points! Yikes I'm moving slowly this year.  Oh well such is life as a home owner and parent I guess. 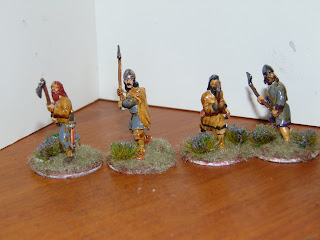 Entires include these fine Irish axmen form Foot ore minatures the first of horde of Irish coming your way. 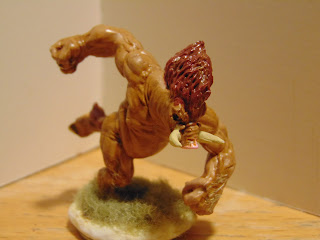 They also include this Werebore form Reaper (Bones III) having fun but cutting out painting time is harder this year as expected.