Arophan has done some new ships for me. Here is an Enterprise class frigate.  It's a 28 gun frigate so a 6th rate in game terms. 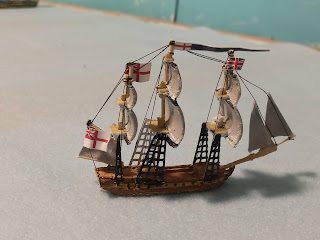 I've christened her the HMS Pegasus because it's the favorite ship name of my old pal Robert Burr (this preference of his dates back to the origional Battle Star Glactica). 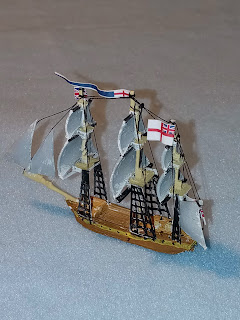 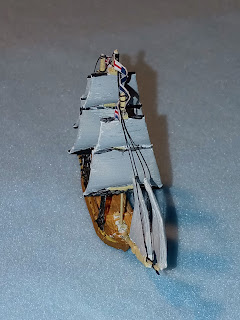 Her hull is very nice it it cleaned up well and was easy to paint.  The dodgy part of these 3D prints is the masts I don't feel I have the patients to build whole masts on my own but I don't love how these come out. 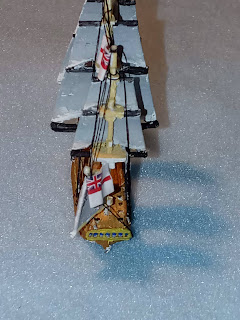 Her stern is one of the best of the 3D prints with a handsome row of windows.  I glued the flags on this time. I started off making flags removable but have found it problematic in practice so I thinik my ships going forward will probably have only one allegence. 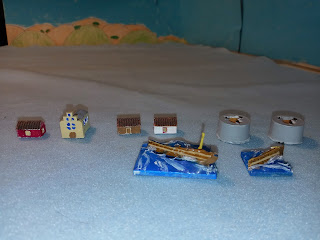 More goodies from Arofan some 1/700 scale buildings, a couple of Martolo towers and some wreak markers. 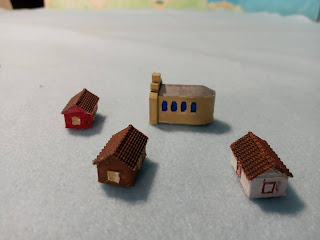 Three small buildings and a church. 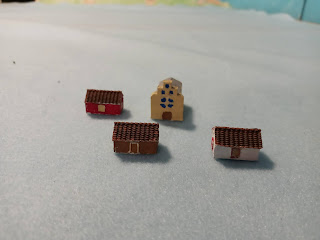 These will work nicely for Caribbean towns of a Mediterranean. 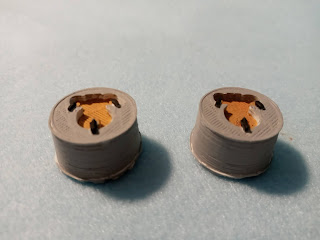 Martolo towers for shore defense I have a bigger one but these are excellent additions to my collection. 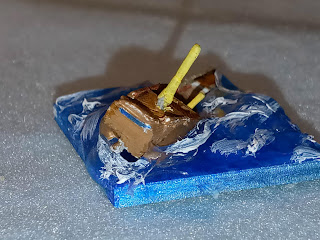 Last of all is a 3D print of HMS Leopard that wasn't quite the right size. 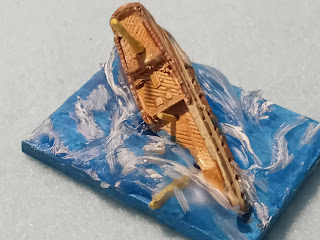 She's the right length but too small in the beam and too short. 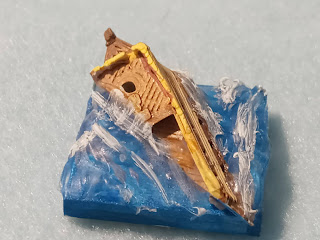 Well I decided I would use that lemon into lemonade. 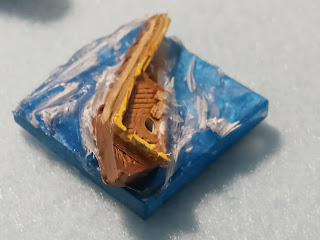 I made a pair of wreak markers out of out of scale ship.
Posted by AdamC1776 at 6:37 PM No comments:

Battle of Murphy's Station (In Freedom's Cause) 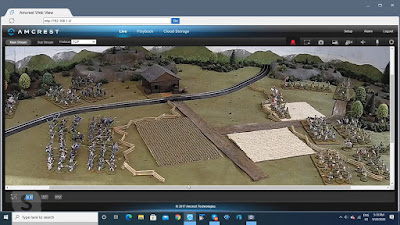 I commanded two small brigades form PA and NJ while Mark had the the large New York formation to the lower left.  Our confederate antagonists are Bill running the Louisiana (North) brigade and Chris with the Mississippi (South) 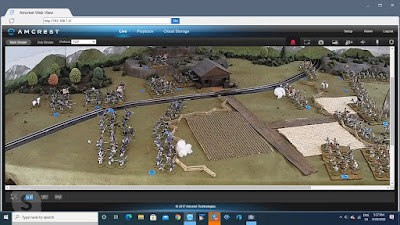 The forces close in on the Train station and begin to exchange fire. 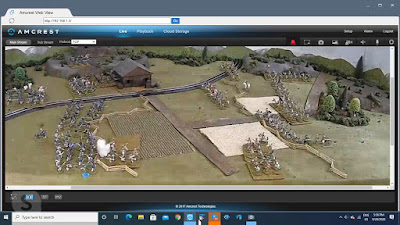 The First Confederate brigade charges and is seen off as the PA Zouaves occupy the train station buildings. 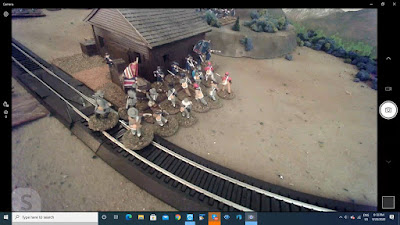 Louisiana and PA Zouaves battle in savage hand to hand fighting. My boy’s sands for a turn but then the pounding is too much for them and they break and run. 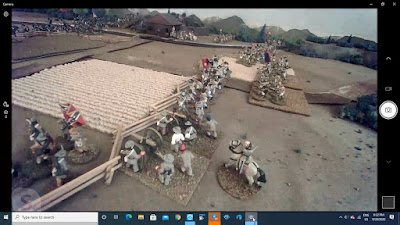 The confederate push to the north is well underway but their attack to the south has fallen back to regroup. 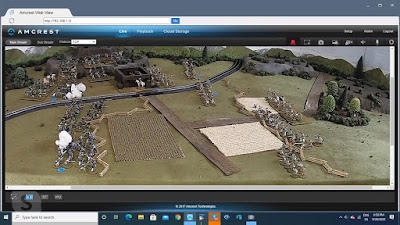 Union Artillery blast the Louisiana troops back out of the town. 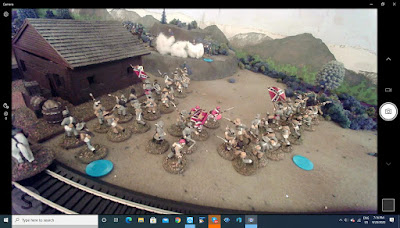 The first Confederate unit has run but fighting continues around the town. The standoff to the south continues.

Confederates attempt to rally int the north (with mixed success) as the standoff to the south continues. 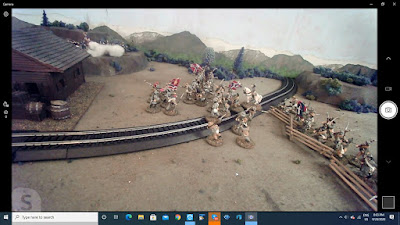 Three Louisiana brigade units are badly hurt but not routed. 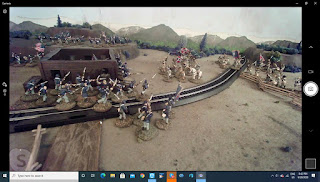 They rally and go back intot the town where close fighting cotinures untill fresh Union regiments can caharge in and turn the tide giving the Union a narrow victory.
Posted by AdamC1776 at 11:47 PM No comments:

English Frigate and French ship of the line 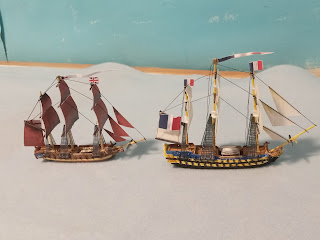 Two new ships one an English frigate the other French ship of the line join my collection. 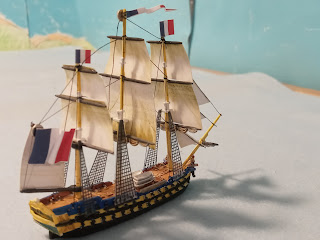 The Ship of the line is the last of the box set I got and came looking quite handsomely. I have not yet christened the ship. 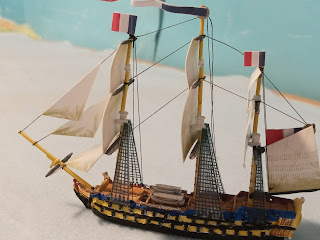 The flags and be swapped out because of magnets or by simply pulling them off the mast heads and then she will be English or some other flag as needed. 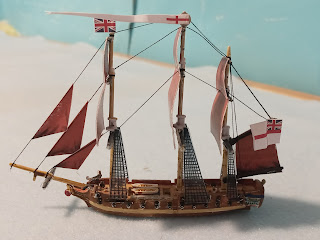 The second ship is an English frigate that I have decided to use the "bark tan" or red sails.  These were common in the far east so this ship may have recently returned from service in the Indian Ocean or East Indies. 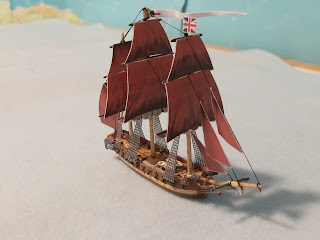 The affect is quite striking, and she looks very fine.  She will make a good pirate if I ever need one. 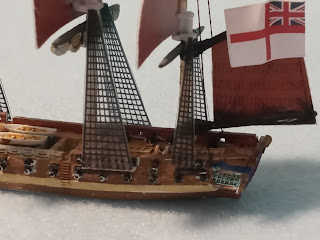 Her flags can also be swapped out for another letting me field them as American's, French or others as needed.

I made a second attempt at Roger's Big Fight/Battle of Sandy Hook. The United States squadron is unchanged but the British have Garriere added and both Aeolus and Belvidere where upgraded to Veteran.

I also changed the wind direction from west to southwest so it wasn't quite so against the British. Frank helped me running Aeolus and Belvidere. Bob had President, Jess had United States while Dana ran Congress. Arofan took Argus and Hornet.

Arofan moved off  to the right forming a mini- squadron to take on Belvidere.

Battle is joined Argus and Hornet fired on Belvidere doing significant damage including a damaged rutter. They get hurt I there turn taking fire from Shannon and Belvidere. I got too cute with Shannon and had to change my menuver breaking my line of battle.

USS Congress is the first US ship to hit Shannon quickly followed by broadsides from President and United States. The noble English frigate is shattered.

Shannon stiles then sinks the British line is is following behind her into the American cross fire.

Aeolus grapples the President while United States turns too follow the English fleet.  Congress cuts behind Africa and hits her with it's heavy guns. The small American ships are trying to get back into the action while franticly making repairs. HMs Belvedere is trying to do the same from the other direction.

The battle is not going well for the English but they have an opportunity. USS United States is alone facing Guarriere, Africa and Belvidere. The English look to take advantage.

I was lucky enough to be a winner in Black Seas Fleet painting contest held by Warlord Games and  Gabrio Tolentino. 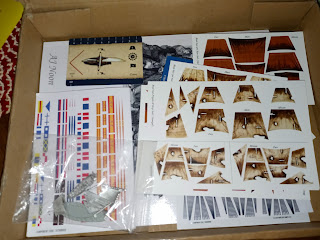 The package of goodies arrived this week sails flags a cutter (with a base) and the first edition of the Trafalgar times. I just had to make use of those battle damaged sales! 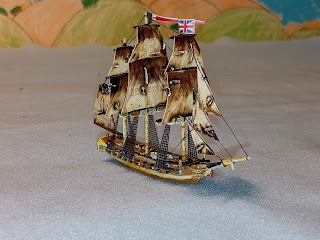 This English.frigate is showing a good deal of battle damage a loft or maybe it's just some storm damage. 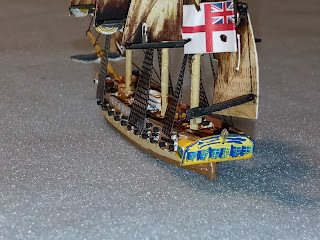 I decided the flag needed a little battle damage of its own.