AJ and I played a night attack mission at Adler hobby as part of a special Black Friday event for escalation league. 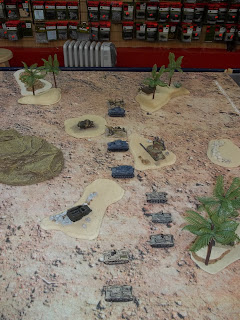 I was faced with AJ’s Australian Infantry force, though with one infantry, two platoons of tanks, and a four gun 25 pounder battery (not to mention a mortar platoon) it was infantry in name only.

On my side I had three Panzer IVDs (including the CO), two Light Panzer platoons each with two Panzer IIs and a Panzer I. I also had a batter of two 10.5cm howitzers; sadly these proved less than effective and I think I would have been better off fielding a two section Panzerpahs platoon instead.

I pushed forward on the center objective hoping that this would cause AJ to come at me. Unlike Chris AJ deployed his 25s up close at the edge of his deployment zone so I faced a lot of AT shots from these and his two platoons of tanks.

Since any shot from his 25s was basically and auto kill (or bail) on any of my tanks I resolved that the 25 pounders had to die first. Over the course of the game I did kill two of his guns and the battery CO (had my battery not had to reroll hits I would have also gotten the staff team and anther gun).

Unfortunately that left AJ with two working guns and six tanks and they wiped out my Panzer IVs and one of my Light panzer platoons over the course of five turns. That left me with only two operating tanks (because I also had one panzer II that was bailed out).

Still with the start of turn six I still had a chance to win the game by moving my two active tanks into a position to take the center objective and get flank shots on AJs tank platoon who had double timed to contest the objective. My shots however did not kill his tanks and the counter strike by AJs two remaining artillery pieces and tanks kill my active Panzer II and bailed the Panzer I so that AJ was alone at the objective giving him the gamem, 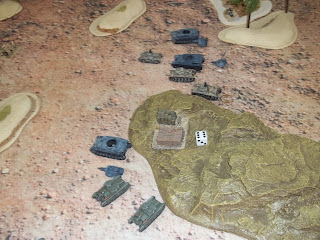 I was very lucky in my dice rolls this game but not lucky enough to overcome 10 AT barrels and AJs skilled handling of his force.

Sorry no write up on last weeks battle pitting my German Panzers against Chris’s Polish(Using the Australian list). For those you are interested that battle was a night battle and though the casualty count was strongly in my favorer Chris played well and it was closer than the score indicates.

Unfortunately I cannot say the same of my Night fight battle this week. With the new burning empires book I have the option to put my early war French on the table as Free French and since we had two Axis and one Allied player I field a company of Foreign Legion Free French. I was contending with James and his African Schurten Platoon. 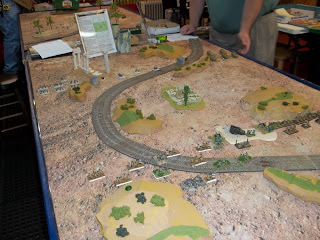 I was too aggress sending my pioneer sappers forward to take the center objective… James used his half track to good effect mowing them down with 24 VMG shots and the next turn assaulting my still pinned men. The next few turns my mortars and French 75s (and even a lucky ‘sniper’ shot from my 2iC) killed many Germans but with one of my two platoons of infantry gone I could not effectively counter attack. 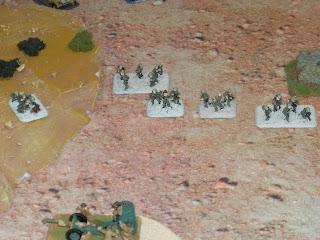 Had I hunkered down I might have won or at least had a more even game. The fact that dawn did not break until turn 5 didn’t help my cause much either. James used his army with skill as I have come to expect.

At the other Table Gordon and Chris had a nasty close quarter’s battle using the Witches Cauldron scenario that looked like great fun. 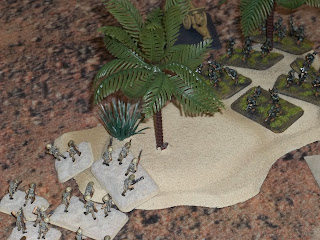 Next I played Gordon and his Italian Positional force. I was up to 950 points of Legionnaires for this one and I had actually designed this list with Gordon’s Italians in mind. Gordon was a little sick of the night combat rules (and I really cannot blame him) so I agree to play a free for all mission. While I had planned to use this list against Gordon’s Italians I had also planned on having the cover of darkness. 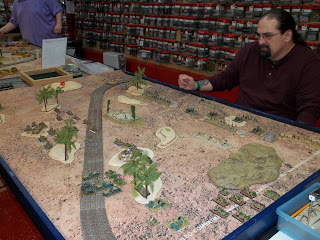 My plan was to have my HMG equipped platoons (using the French integrated defense rules to hold Gordon’s attention to the front (and hopefully keep his head down) and then send my sapper flanking using the cover of a rocky hill to take the objective on the right hand side of Gordon’s position.

Gordon hit my HMG Platoon with 12 HMG and 3 AT gun shots scoring 6 hits… I failed two infantry and two gun team saves… and that platoon was down to two men! One of my other infantry platoons suffered similarly losign about a 3rd of its men.

Turn two I smoked part of Gordon’s Artillery, (and got an AT Bunker and HMG Bunker too) and tried to get my men moved into firing position. Gordon’s two batteries ballasted and smoked my own Artillery an my mortars (smoking the smokers is a good tactic, well done Gordon).
Gordon’s Gun pits kept taking their toll and though less bad than the previously turn I still lost a platoon. Still I felt I was still in a postion to carry out my plan if I could get my Mortars unpinned (which I did) and if Gordon didn’t smoke me again (naturally he would.)

The real damage came in Gordon’s turn three when he got air support and turned his guns on the Sappers working around the flank… A three Squad platoon of 12 stands was reduced to two in the blink of an eye and with it French hopes. The sappers failed both Platoon moral check and re-roll. Although I was still in the game there was no way I could cross the open ground with one full strength and one badly shot up infantry platoon… I choose to concede the game a this point. 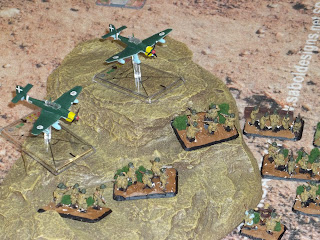 Gordon had a lot of advantages here and I think my plan was as good as it could be given the army I had.

Next time I plan to bring my H-35 Tanks and maybe get some Australian Cavalry Scouts to help close it. I think the Positional forces are going to prove very hard to shift with out the cover of darkens (especially for infantry)

Thanks Gordon, James and Chris for a great night of gaming. Pictures will be up some time this weekend or Monday.
Posted by AdamC1776 at 7:58 AM 1 comment:

Thursday night Chris and I met for another epic Flames of War battle. All summer I got to play Megamind to Chris' Metroman. In other words "our battle were epic, he won some I almost won other." Thurdsays result was some what different.

This particular battle started with Chris' polish infantry in a dug-in position with a unit of 2lb AT gun portees in ambush. Chris also had another infantry platoon and a 81mm Mortar Platoon off board in reserve.

Chris set his defences well as I have come to expect with the infantry dug in around the objectives and behind difficult terrain.

My Panzer IVs moved up the center while the light panzer moved to the left to flank Chris' line and maybe pull out his ambush. (Chris was to smart to do this of course but one has to try.)

Chirs got reserves on his first turn and moved in his second Infantry platoon... right in Front of my Light Panzer. Shots from is Boys rifles bounce off my panzer and on my turn I used my Panzer Ivs to bombard his second infantry platoon killing two and pinning them. My Light Panzer then moved in firing MGs and killing several more. The rest of the platoon died in the Assault phase.

Chris got his revenge however uncovering his ambush 2 pounder porters. His shots killed on Panzer VI and bailed the other. 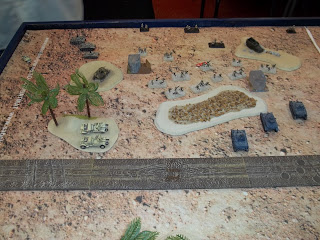 A lucky Boys rifle shot bailed my Panzer I. Oh how fast the tide of war can swing.

Chris's mortar also arrived on board but had minimal impact on the battle.

I now faced a choice keep my CO in the line of fire of Chir's Portees and support the bailed out Panzer IV or maneuver for a better shot a them with MGs. (I failed both remount rolls but also forgot I had rerolls for protected ammo) I chose to manuver and my Panzers combined to kill one Portee and it officer. Chris assaulted my bailed out tanks killing both the next turn. My Panzers launch assaults on his infantry killing several but being driven back with the loss of one panzer.

Fortunately Chris failed to hit with his lone remaining Portee and I killed it the fallowing turn. MG fire killed more infantry and Chris' CO and the next turn he failed a Platoon moral check prompting a company moral check which he could not make due to the loss of his CO.

Chris and I always fight a close battle and one finaly broke my way. Chris made a rare mistke marching his men on in range of my light Panzers but he almost made up for it with his ambush. This battle could easily have gone against me. 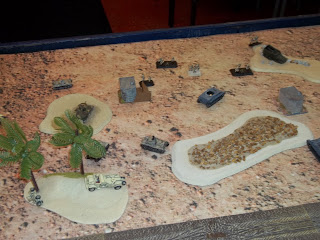 Last week I met up with the guys at Adler Hobby in Holis New Hampshire. I arrived late due to some work and other obligations and two battles were already under way. After the first round of battles were through the allied players had to leave (well actually AJ stayed though he claimed he had to leave early) so James and I decided to hols a little Africa Korps Training exercises.

My Panzer force faced James Afrika Shuetzen company. James was the defender and started with two of his four platoons off board.

Since starting the escalation league I have decide to embrace the idea that my force is a blunt instrument and my first attack reelected this. My Leich Panzer raced ahead and assaulted James' dug in infantry on turn 1!

The result was disastrous. I didn't kill any infantry and lost two tanks. So much of the knockout blow. James got his AT guns on his half of turn one. He also pulled an ambush with Pioneers and his flames throwers killed on of my priceless Panzer IVs. I had started the battle with six tanks now in only one turn I was down to three things did not look good.

Over the next Six Turns Panzers, half tracks, Pioneers, AT Guns and Infantry engages in a battle of thrust, parry and counter. James Bailed my tanks many times especially the sole surviving Panzer II but he was unable to destroy any more. Slow my Panzers killed his men one at a time with MGs and the occasional cannon shot I killed his pioneers, then his AT guns and finally his infantry driving his men off the objective on turn seven and securing the win.

I would have received a stern talking too about risking light panzers against dug in infantry from Rommel had this been a true training exercises.

I may have won but James deserves high praise for his skilled handling of his troops.

Pictures will follow at some point sorry for their absence.
Posted by AdamC1776 at 10:12 AM No comments: