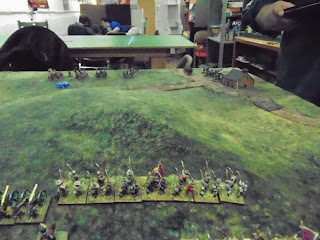 Friday Night John and I met to try out our system using the Longstreet Campaign with the.  We had hit on the idea of using historical scenarios with our ahistorical campaign forces.  It seemed right to have our test game be from Bull Run. My army consisted of two brigades the Texas Brigade of the 1st, 4th and 5th Texas with a Mixed battery of smoothboors and Rifles holding the hill.  They had a second brigade with Wheat's Tigers and the Hampton Legion (both Infantry and cavalry) in support to the left. 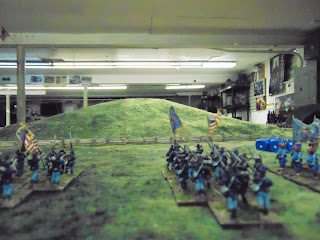 John had two brigades of infantry one of two battalions and a battery and the other with 4 battalions. the sharp eyed might just see the confederate banners peaking over the hill. 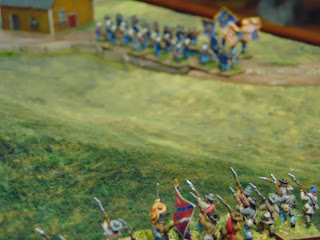 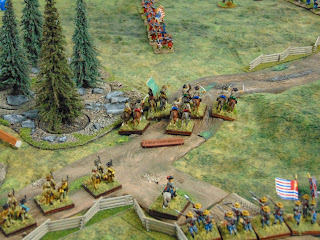 Well John was actually moving against both flanks at once my cavalry tried a charge but got disordered (unformed under the rules) and fell short of hitting the head of John's column of Zuoves. 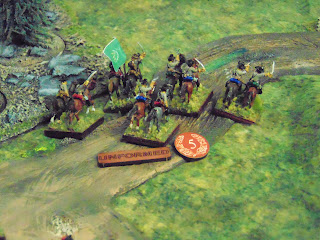 Not surprisingly they got smashed the rifled-muskets of the Zouves and the union battery.  A few turns latter they would dispersed under continued pounding. 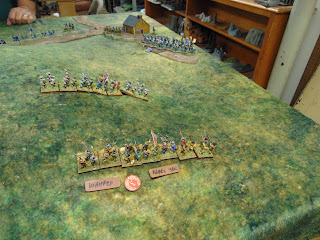 My infantry tried to block the union attack on the right but despite landing a good volley the return fire sent us reeling back. 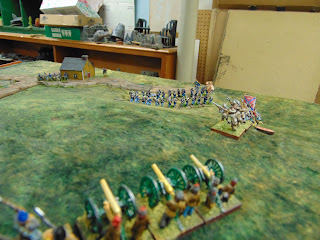 With the attack developing to the right my guns turn to bring their fire to bear. 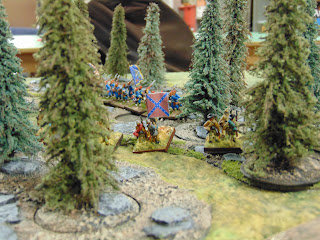 The Hampton Legion Infantry in skirmish order is doing a good job holding the Yankees in the woods. 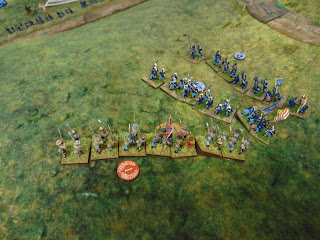 The Union Artillery preparation is fairly ineffective but two union battalions charge the 4th Texas.  The Texans and the supporting batteries hammer the lead battalion, scoring 8 hits on top of the two it had taken earlier. The Texans don't roll well on their melee test but John's boys have a -7 to over come as a result of the fire they have taken. 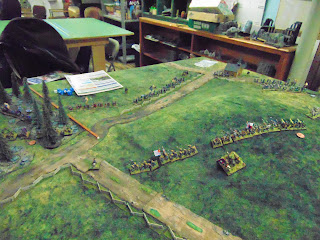 The Yankees have run out of time for a Confederate victory though neither side has taken much damage.  Both John and I have earned 3 epic points so our armies will grow by that number of units. 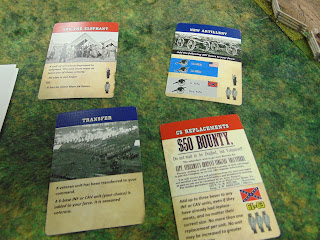 John got 4 See the Elephant cards so 4 of his green units will got the regular status.  I got on See the elephant card that I awarded tot he 4th Texas.  I also got a battery of new rifled artillery  and the CS Replacements card gives me new unit of regulars. So next battle my army will field 12 units.
Posted by AdamC1776 at 8:03 AM 5 comments:

In 1662, the then Governor of Jamaica, Lord Windsor, received royal instructions to protect the "Caimanes Islands ... by planting and raising Fortifications upon them"; the fortification, however, was not constructed until 1790. 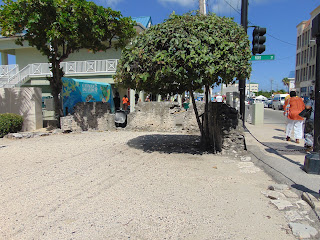 Fort George was built using local coral rock and limestone ironshore with its design being based largely on the English fortifications of the time. The oval base of the Fort measured approximately 57 feet by 38 feet. There were eight embrasures for cannons around the sides of the fort and a mahogany gate on the fort's landward side. The walls of Fort George ranged in thickness from two feet on its landward side to five feet on its seaward side, with the walls being about five feet in height. 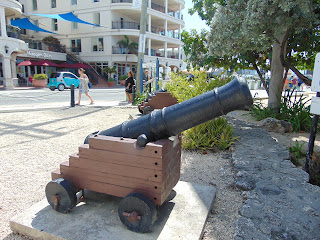 In 1802, when Edward Corbet came to Grand Cayman to compile a report for the Governor of Jamaica, he found the Fort "by no means well equipped" with only "three guns, four to six pounders", rather than the eight required by the original scheme. By the beginning of the 20th century, the fort was no longer in use. During World War II, a tall silk cotton tree growing within the fort was used as a lookout post. Members of the Home Guard, whose barracks were located next to the fort at Dobson Hall, would climb up into the tree’s branches to watch for German submarines, many of which patrolled Caribbean waters hunting for merchant ships setting out to cross the Atlantic with supplies bound for English ports.(the above was taken form Wikapida)   At some point a structure like the one above was added for shelter. 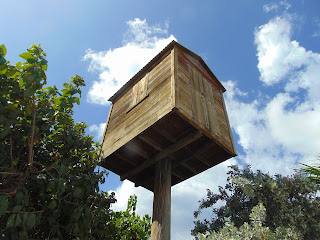 As the tree is gone this replica stands on a telephone pole.  On the same day we visited the Cayman Island National Museum.  Its an excellent little museum located in an old building that's been every thing from the island capital, to a court house/jail, dance hall, church and now a mu seam. 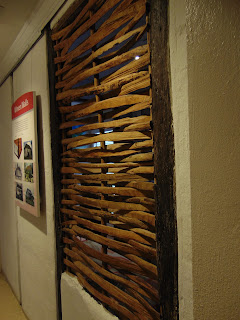 You can see a example of the original construction of wood and plaster. 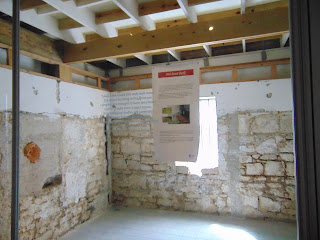 This is the old jail cell which has had various layer removed at different layer, You can see the various layers of plaster and the old coral core.  Also several bit of graffiti are visible. 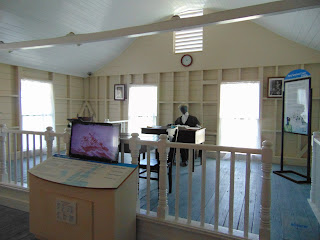 Finally part of the museum done up as the building looked when it functioned as a court house.  They have three movies that focus on significant cases for the Island. 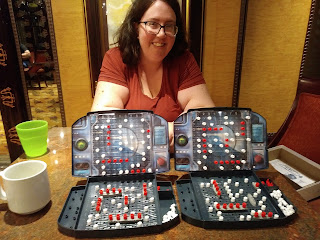 Back from vacation so I haven't had a chance to do much painting or war gaiming but Battleship counts right?  I started off strong hitting sinking her battleship and carrier right off but then she found my ships one after another. She won by a handy margin her sub was untouched and her destroyer had one hit left when the last of my fleet slipped beneath the waves.