Last Saturday was the Amherst Maker Space Game day.  I got my Mother-in-Law to watch Evelyn so I was able get in a game and run a game. 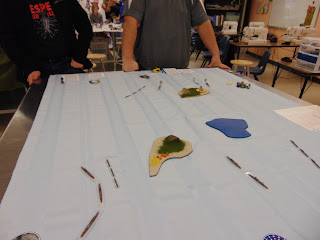 I the morning I got to play a game of GQ3(corrected) run by Frank.  It was an encounter between his two favorite navies the Royal Navy and the Imperial Japanese Navy cruisers who encounter each other on a sweep.  I had the IJN. 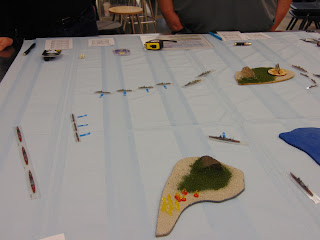 Turn one saw ranging shots and HMS Belfast landed a bulkhead hit on Noshiro putting her in serious trouble. 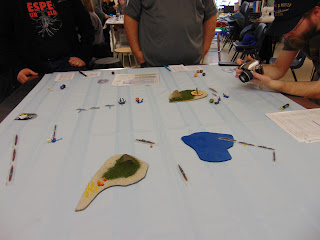 Turn two saw a massive exchange of Torpedoes including an extraordinary effort by Shigure landing 8 out 8 hits with her tubes.  As the smoke cleared the Royal Navy was down three Cruisers and two destroyers.  The Japanese fleet had one Destroyer setting to the bottom and serious damage done to both Agano and Noshiro (both light cruisers) and minor damage to two other Destroyers. 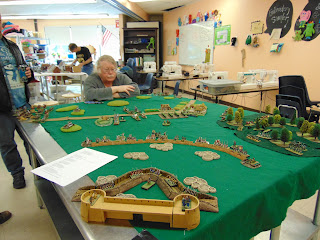 In the after noon I run a game with Mark and I taking command of the forces of the Grand Duchy of D'Argent attempting to relive the siege conducted by the Draconian Empire commanded by Kelly.  The Duchy's light forces striking from the woods to strike at the rear of the Besiegers had initial success but were largely check by the arrival of Imperial Grenadiers. 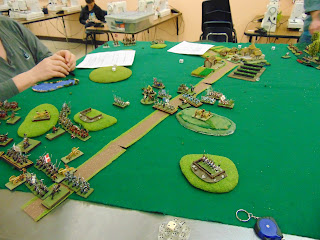 The more tradition relief force struck at the main body of the imperial covering force.  The battle was hard fought but the Empires force of Cavalry was not able to arrive in time. 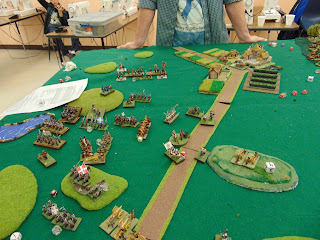 Kelly fought a good fight given he had no one to help him watch the various sectors of the battle field. I didn't quit get the balance right but it was still an enjoyable game.  There were many other excellent games you can check out some pictures here: Maker Space Game Day 3/30/2019