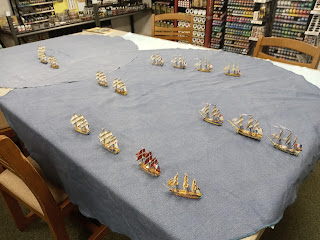 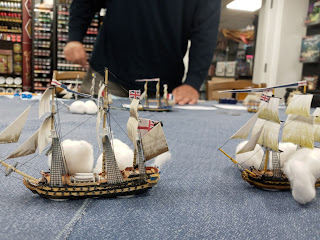 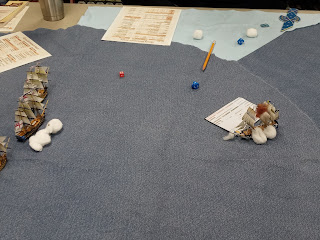 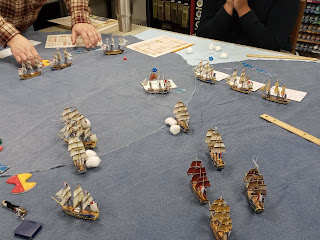 HMS Revenge takes the brunt of the French fire as the fleets close. 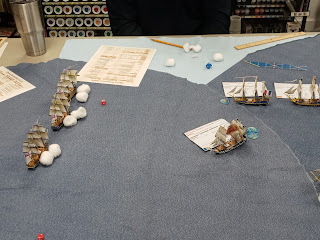 HMS Royal Sovereign leads the rest of the British force. 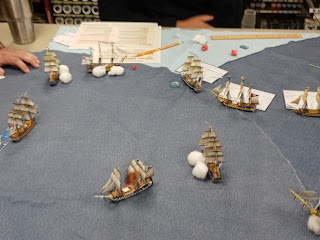 Then disaster strikes as a critical hit ships away the Royal Sovereign's Rudder sending her towards the French. Who rake her repeatedly. 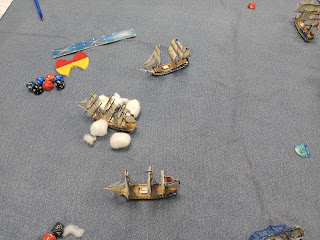 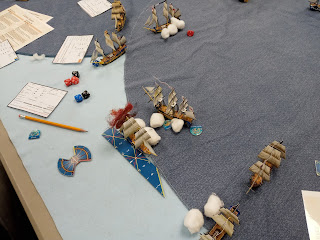 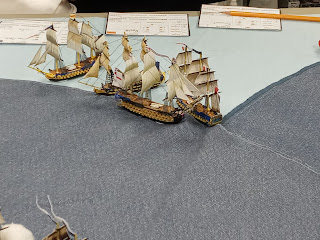 Bucentaur grapples Royal Sovereign and Nestor closes in. The noble ship is doomed but three British ships have escaped.  If the HMS Royal Sovereign hadn't suffered the ridder hits the fight might have gone very differently.

I'm running a fictional battle I call the Battle of Grand Banks for the Fort Devens Museum Game Day It's an encounter in 1812 shortly after the war has been declared.   I am assuming both sides are more prepared for war than they were historically and a small fleet action results. 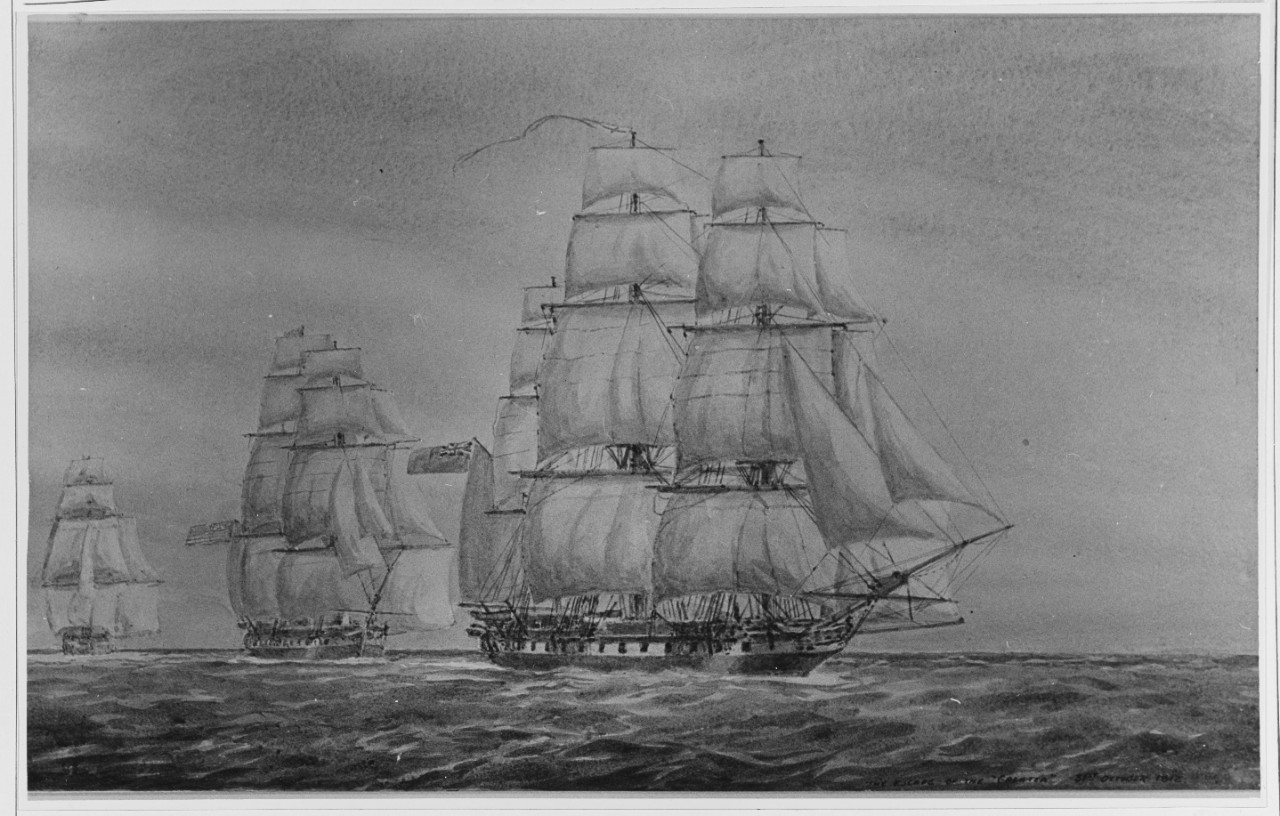 Historically Commodore Rogers had a squadron of USS President, USS United States, USS Congress, USS Hornet, and USS Argus.  USS Constitution and USS Essex where supposed to join him but where delayed.   So I have assumed that had US official been a bit more war ready the Constitution and Essex could have joined him.  I've also swopped out USS Argus for USS Wasp  a slightly stronger ship. 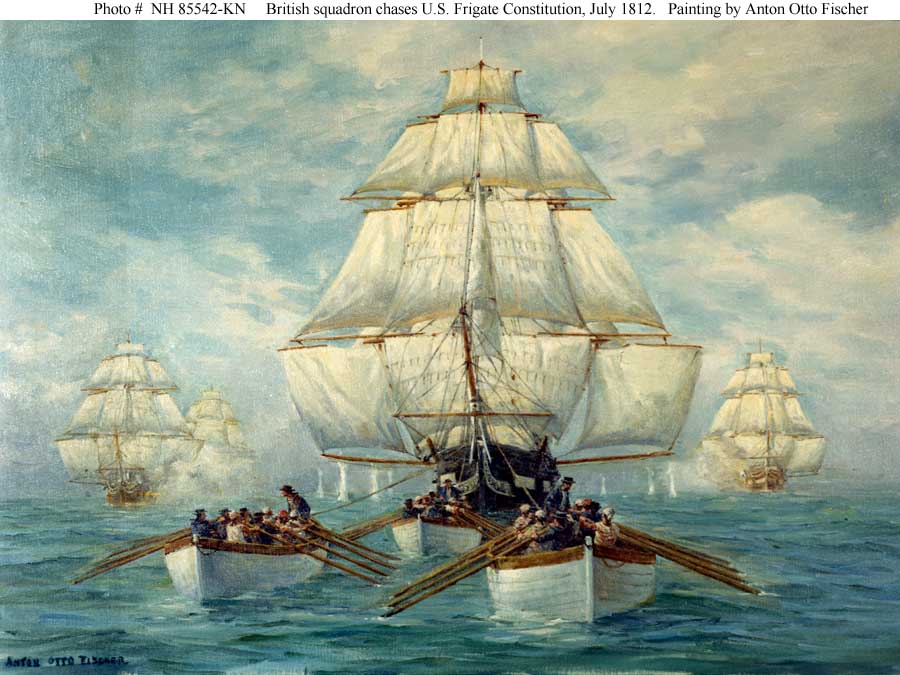 On the English side Commodore Brook's Squadron is based on the one that chased USS Constitution but with two significant reinforcements. HMS Revenge replaces HMS Africa giving the English a 74 in this prime rather than a worn out 64.  The English also have HMS Acasta and HMS Endymion two large frigates of similar age to the three big American Frigates (though not so so powerful).  Shannon (Brook's flagship), Aeolus, Belvidera, and Guerriere round out the Royal Navy fleet.
Game day is Saturday 10/16/2021 from 10:00 AM to 3:00 PM.
Posted by AdamC1776 at 2:33 PM No comments:

Black Seas: the French battle a Spanish and Danish fleet

I had some medical appointments in the morning so I took a full day off and met John for a game of Black Seas.  John's ships had been stuck in Montreal because of covid so this was our first Black Seas game in a while. 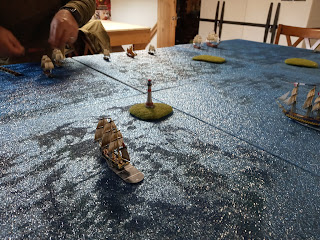 John's fleet included three sturdy 5th rate frigates, two of which had extra Carronades as well. He also had a sturdy Sixth rate (Xebec) and a pair of Sturdy Brig's. Finally he had a Sturdy 1st rate with a Master Gunner and a veteran rating too! John also took a full load of upgrades for his ships (several were lucky and so forth) 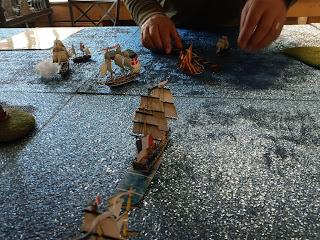 My fleet had a sturdy first rate and three sturdy 3rd rates, with trained Marines. My force was rounded out with a pair of 5th rates both with the Sturdy and Steel lined hull upgrades. All of my ships where rated average. 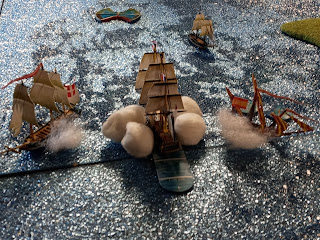 The game started well for me. John hit Bucentaur with two broadsides but I slipped between the Frigates and smashed both hard. 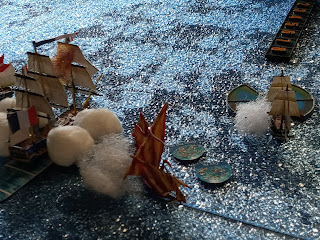 A very cheeky brig hit Bucentaur and landed a critical taking me out of the fight for a bit as the crew focused on firefighting duties. 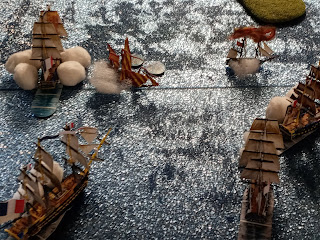 But Bucentaur 's consorts are closing I an Redoubtable sets the brig ablaze in it's turn. Off to a good start but John's Leviathan hasn't entered the fray yet. 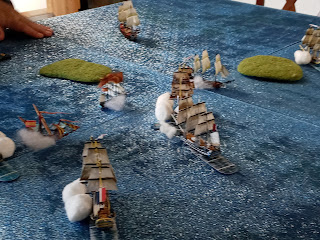 One of the Spanish frigates ranging ahead of her 1st rate consort crosses the T of the Redoubtable. 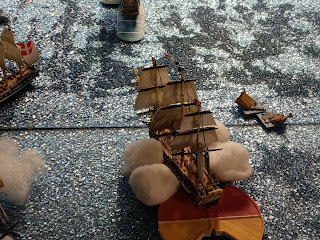 L'Orient following in the wake of the burning Bucentaur smashes the Xebec and damages the Danish frigate forcing it to strike. 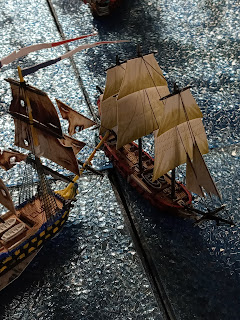 Redoubtable is in trouble raked by the Spanish Frigate the two ships then collided... 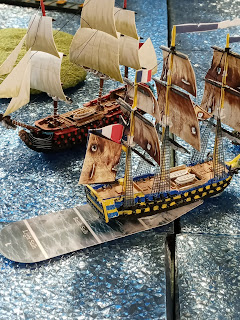 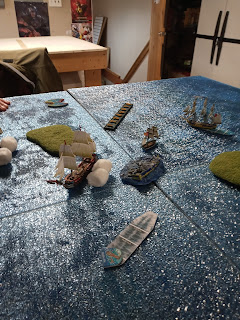 Redoubtable is crushed by the Leviathan's fire sinking beneath the waves. 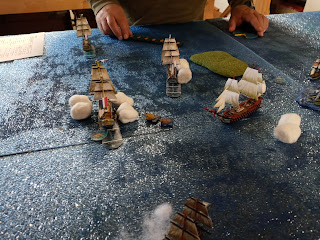 Agele and L'Orient fire on the Spanish 1sr rate. Agele is hit in turn it rudder shot away 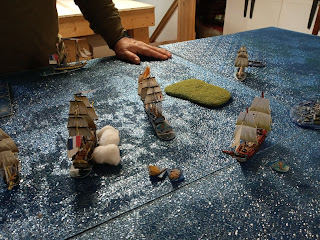 The first rates circle each other exchanging fire. 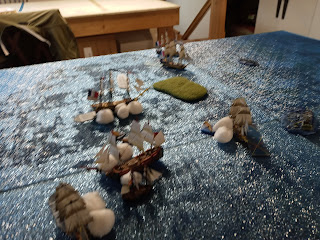 French and Spanish ship converge a Spanish brigs and a frigate fire into L'Orient but are taken down by French frigates. 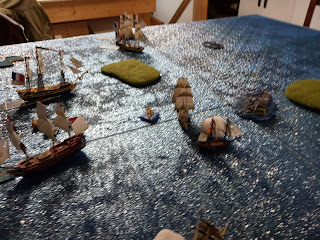 John's Leviathan Raked by Bucentaur and hit again by L'Orient is driven to strike but her final broadside hits L'Orient's rudder and the ship runs aground on one of the islands. One Spanish Frigate escapes but there other ships have struck or sunk. I lost Redoubtable and L'Orient was reduced to 30 points John's veteran 1st rate almost turned the tide on its own. The game was great fun and look forward to more.
Posted by AdamC1776 at 10:32 PM 4 comments: