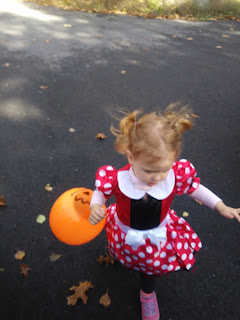 Saturday Evelyn picked the Mini Mouse costume for the Downtown Trick or Treat event (10/26). She refused to keep the Ears head band on so I did her hair up as on each side as 'ears" 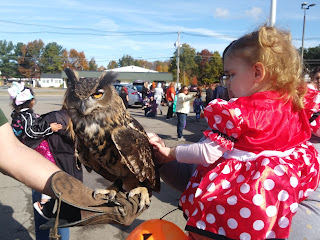 One of the highlights was meeting this handsome Great Horn Owl from Animal Adventures I was surprise how willing Evelyn was to pet the bird and how gentle she was (she plays pretty rough with her stuffed animals and only has limited experience with live animals).  We plan to visit house in the neighborhood Thursday (weather Permitting) so yo may see some more pictures. 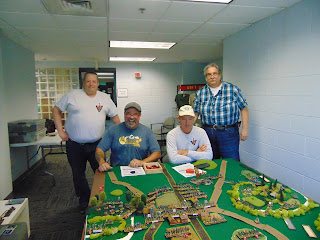 This past Saturday I had four awesome Player for my Battle of the Crossroads game at the Fort Devens game day.  From Left to right: Ken, Rich, Dave and Bill. 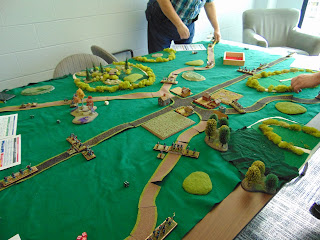 Union and Confederate cavalry advance on crossroad village in the mountain gap. 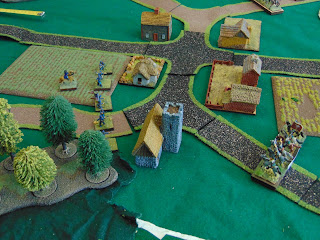 Union cavalry dismounts to move into the village but are charged before they can take up their position.  They are charged by Hampton's  who drove them back in disorder. 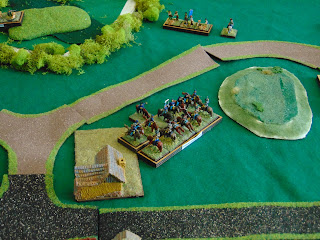 Buford's cavalry clashes with and drives back Imboden's 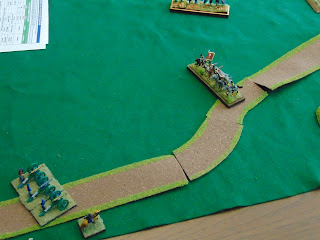 Hampton's cavalry soon has the attention of the Union artillery and infantry as they follow up their charge. 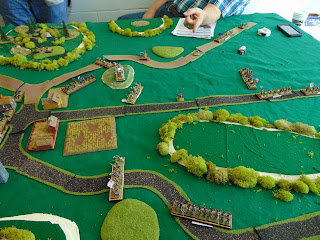 Confederate troops are moving up into position the Union is less fortunate in their reinforcement rolls and has fewer troops on the board.  Buford pulls back his cavalry rather than face off with a dismounted unit of Cavalry and two infantry brigades.. 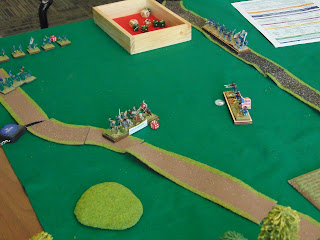 Hampton's cavalry takes hits but is still a going concern as it begins to pull back. 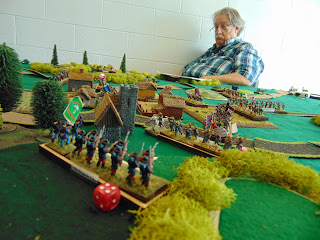 The Irish brigade moves up on the west flank of the battle field taking shots form the Tiger brigade as they do. 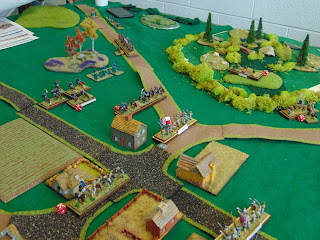 The Confederate forces have taken up positions in the village with reinforcements coming up.  The Union has small forces on both flanking hills. 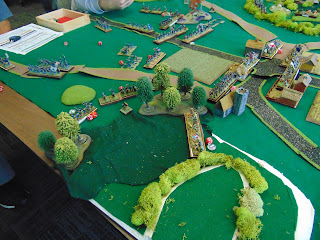 The Irish brigade falls back... union troops have been force backed and Confederates build a good line of troops in the two and on the hill to their left. 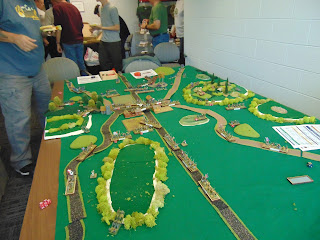 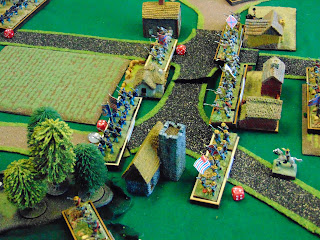 Union troops push into the town after artillery drives off one of the lead infantry... 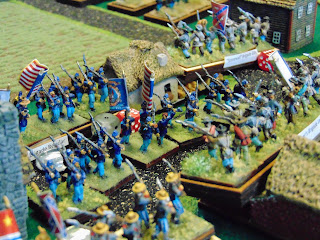 The heavy union attack is stopped in a close range fire fight...  at this point the battle had to be called as the museum was closing... the Early going went to the Confederates Hampton's Cavalry did especially well. 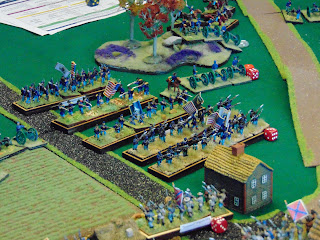 As the game progressed and more Union troops came in the momentum may have been starting to swing.  This union column of brigades ready to hit the Confederate right with the support of three batteries for example.  When we ended the game the Confederates held the town but the union was pressing them and forces were engaging on both flanks things were very much in dought. Both Side had had two unit dispersed but both armies were very much in tact.  Wish we had had another hour or so.
Posted by AdamC1776 at 10:55 AM 4 comments: 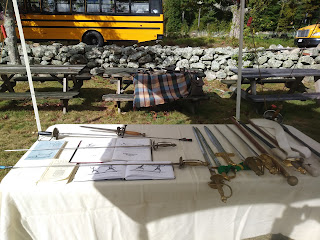 My unit Regiment Saintonge has been working with  Blackstone Valley Techical School they had a grant that let us bring in many reenactor craft people and speakers.  Friday I did a little talk on roll of fencing in the French Army and on different types of swords and their function. 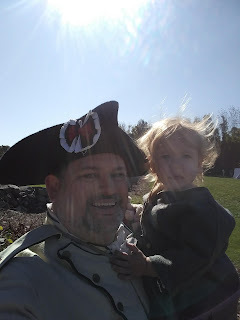 Saturday Evelyn and I were part of the French camp.  There were a few kids attached to NCOs or senior enlisted men (and their wives) so she's not as out of place as one might think. 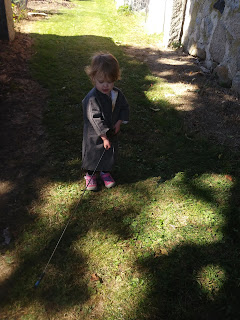 My little lady handling a sword for the first time.  She insisted on carrying it for me I kept a very close eye on her so don't worry (its a fencing blade no edge or point) 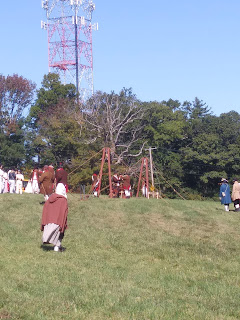 An American artillery unit demonstrating and apparatus for moving an artillery piece across a river or ravine. 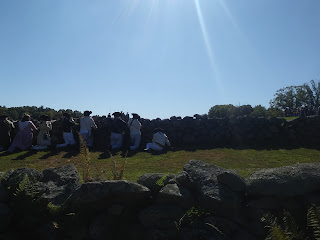 One of the young ladies form the school volunteered to watch Evelyn so I could be part of the Battle but some how Evelyn and the young lady got attached to our Student picket line who took the brunt of the first attack.  I was moving out with the French line when I saw my friend Jess who was attached to the students running back with Evelyn in her arms and the students trailing behind her.  Evelyn was crying for Daddy.  I had to fall out and calm her down.  We were behind the rock wall fall back the kids reformed behind.  We watched some of the battle untill Evelyn fell asleep in my arms.  The rest of the day passed without insident.
Posted by AdamC1776 at 11:58 AM No comments: