No Longer For Sale 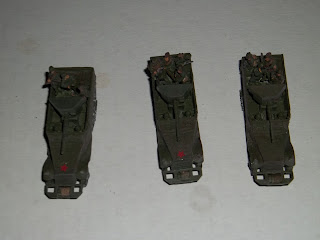 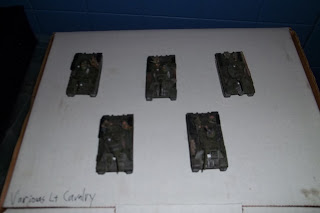 I have some T-34s and SU-57s I painted up a couple of years ago for a Soviet Army project that never got off the ground. Anyone interested? T-34s are Battlefront, SU-57s and tank riders are Command decision (Old Glory)
Posted by AdamC1776 at 11:38 AM No comments: 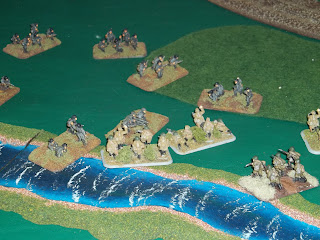 Since Ariana was working Saturday(as our only common day of Saturday is date day for us, excepting her taking OT or me having a reenactment) I had a chance to visit my old friends at 3 Trolls Games and puzzles in Chelmsford MA.

For those who do not know 3 Trolls its a game store with a mix of products from children's games to miniatures and hobby products. Still the hear of the store is gaming mostly Flames of a number of fantasy games. Flames of war is played Saturday.

I was pushing two of for Soviet infantry companies, Warren Smith had the other two Soviets companies including some "Black Death" Soviet Naval infantry. Dick (the store owner) commanded the Soviet Artillery.

The game lasted about 5 turns and was a simple kill and break through game 2800 point on the soviet side against 1600 points of German Grenadiers. The Germans started dug in and were commanded by Charlie and Harry.

Warren had limited cover on his side of the board and Dick's less then godly rolling as the "red god of war" lead to his assault bogging down at the river. Some units did cross but were killed by German troops.

My force took advantage of some hills for cover and managed to assault across the rive under cover fire from 4 HMGs. It took about three turns but repeated assaults caved in the German flank eliminating an Infantry gun unit, and kill most of two infantry Platoons. I was in a great position to hold against counter attacks but could not go further. The We decided to call the game at this point since it was clear the Russians would not be able to push further but also clear that the Germans would not be able to effectively drive us out of the limited gains we had made.
Posted by AdamC1776 at 7:15 AM No comments:

Email ThisBlogThis!Share to TwitterShare to FacebookShare to Pinterest
Labels: 3 Trolls, Flames of War 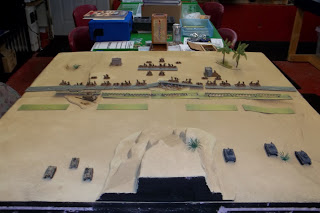 Last night a number of us gathered for the escalation leage at Addler hobby in Hollis NH. Gordon and AJ had a hard fought battle that you can read about here: http://ajs-wargaming.blogspot.com/2011/10/ew-north-africa-escalation-league-1.html Aaron and I had a battle with my German Panzer company against a British Rifle company in a dug in postion with sticky bombs.


I was worried about having to pierce those defences and take an object in six tourns. Fortunatly the 'peliminary bombardment' killed three stands in one of Aarons infantry platoons providing me with the opening I need. Minfields forced me to manuver so that it took two turns to cover ground that should have taken one. Had Aaron had even one AT gun platoon or a battery with a decent fire power I would have had serious trouble. 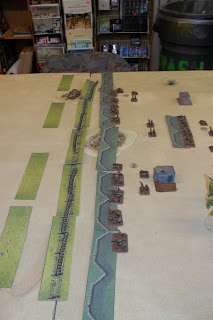 I consentrated fire on his damage platoon pinning them and killing another stand then launched an assult with my Light Panzer platoon. I killed two more stands but his men counter attacked and the Boys AT rifle killed one of my Panzer IIcs. I failed the motivation test and my tanks fell back. 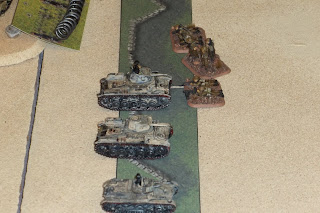 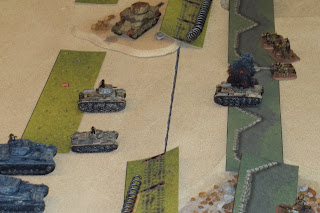 Aaron tried taking out my light tanks with his AT rifles but had no luck. Turn 3 I had my Panzer IVD Platoon and Company comander drive over the now mostly unoccuped trench and on too one of the objectives. Aarron launched a dairing assult with his reserve platoon but two of his 4 assulting units died yelling "hey guys watch this!" as the rolled 1s with their sticky bombs thus blowing them selves up not me. My counter attack kill two more and Aarrons men failed moral and british bull dog rolls. His second assult on my light panzers (hoping for a break through to let him contest the objective) also failed. By scenario rules I had the objective and the victory.

British infantry are tough I'm not sure I could have pulled this off if they had Artilery or At guns. Aaron played a good game with the army he had and was gracious in defeat, very sporting if I may us a British phrase ;)

Pictures will follow, tonight or over the weekend.
Posted by AdamC1776 at 6:49 AM No comments: 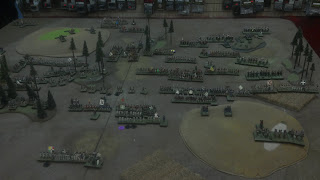 OK so first of all you can see from the photos this is no ‘little demo/learning game’ I jumped in with both feet and probably into water over my head. I’m happy to report that despite that the game played well.

No points were used I simply wrote up two forces one an allied army of Austrians and British and the other French based on what I felt would work based on my study of this period (I set the battle in the War of Austrian Suspension). Keith indicated he felt the game played in a balanced manner as did Gordon so I think I was reasonably successful.

The battle started off with my infantry running forward on my right and center though my right Wing cavalry was less enthusiastic. On the left the Cavalry screened the infantry as intended. This was a result of my command rolls.

The orders function of this game is a key element and the one I was most concerned with but I found this system worked, since usually you can move, and you do have options to move with out making an order roll when you really need to.

Keith countered and we had a Cavalry battle that was a split decision (one unit retiring on both sides) right off. Over the next few turns Keith used his Grenadiers, Dragoons and British line troops to hammer my Right and Center. I got in several good blows of my own especially on his grenadiers when they had to face my closing fire… (Their “Steady” attribute meant their Breaks turned into retires) At the end of 4 turns I was in serious trouble in this area. Four of my infantry units were broken by a combination of English fire and German bayonets. Still the situation was only bad not desperate as my Irish and Swiss troops had formed a second line. Keith did have local superiority especially in Cavalry.

On the Left I had massed 4 units of cavalry with an infantry brigade in support I infantry and guns had broken Keith’s cavalry on this side and I was about to try and exploit this open area when we had to call the game.

The situation was ripe with opportunity and danger for both players just how a good balanced game should feel at about mid point… So I call Black Powder a win for me and for the Club.

Some observation about the game:

I have see BP described as a “division” level game. But I don’t think this is correct. It’s an army level game. I think the confusion is one of language.
The basic unit of BP is called a Unit so as not to cause confusion when speaking of regiment, battalion or Impis (spelling?). This is wise because these units really could be Companies, Battalion or Brigades (or any thing else) and as long as both players are playing at the same “level” it makes no difference.


The confusion comes when we start grouping these units into what I am going to call “Command Organizations” (COs) but BP calls them “Brigades.” The choice of that word is unfortunate as it leads one to make certain assumptions about the units below and the commander above. After all Brigades are made up of Battalions (or regiments) and are grouped into Divisions. Really though these COs could be Battalions, brigades or Divisions.

You then have an Army commander who is in fact an army commander, the lack of any intervening command structure between him and the “COs” I think has lead some to think he is a Division commander(since he has Brigades under him) but really he is the army commander.

I sincerely hope I am not confusing people further, but I probably am.

I think the command and control element of this game is a great strength and I am usually not a fan of having to roll to see if my units do what I want… still they worked well and added fair bit of flavor to the game.

Also adding flavor are the attributes you can assign to your troops. First Fire was devastating, Tough Fighters gave units a bit more kick and Steady was a real game changer (Keith would have had three more Broken units with out this). I think the Cards that have been added to the forum will really help with game play because there is a good bit to track. Gordon’s Token system was a great help in this regard but some things like First Fire, Steady and so on really need to be tracked with out adding clutter to the table.

Over all I was impressed and I'm looking forward to my next game. 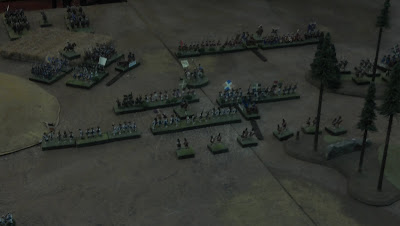 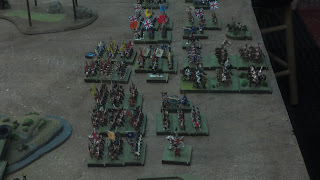 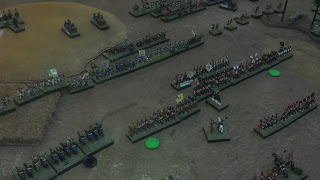