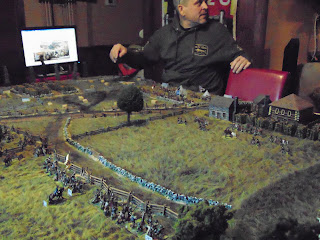 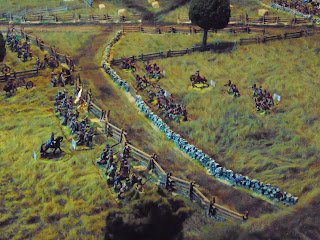 My command started on the picket fence and advanced into the lane to take advantage of the stone wall (or at least deny that advantage to the loyalist infantry that was rushing up at us. 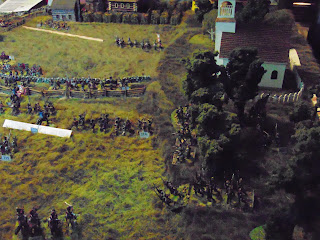 I was just thinking we were in a good position when I got a bad feeling and a Hessian brigade supported by Lt. Dragoons came marching out of the woods. 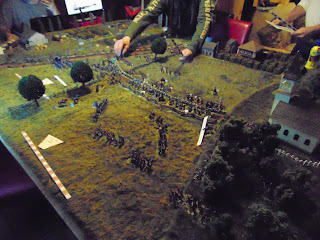 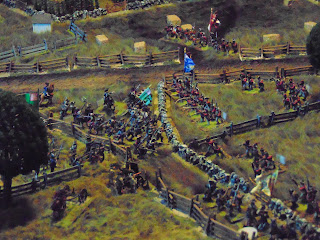 The British camp is awake now and is marching out and attacking our line on the left. 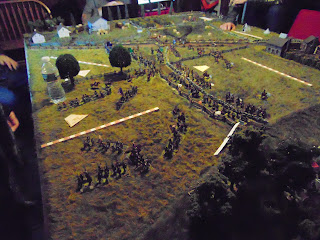 While the rear militia brigade was able to forestall the Hessian's nearest the woods the Lt. Dragoons and a battalion of Grenadiers did make it out on to the field.

The dragoons caught a battalion of continental rifle men in column and quickly scattered them coming up in the rear of my right flank unit. 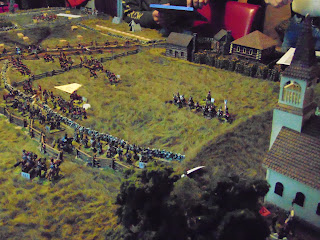 It wasn't all bad news as my militia men are fighting like heroes trading volleys with redcoats are short range and even seding the highlanders packing. 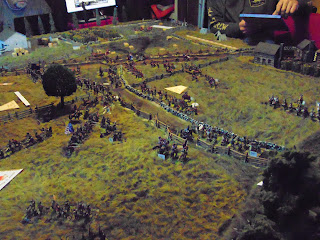 But then the sustained fire fight becomes too much for my left side battalion and it fall back. 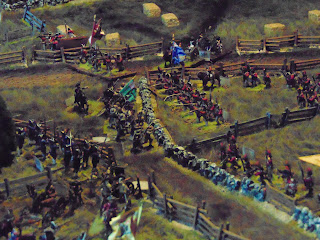 The British Press us on the right as well and they charge the artillery pieces in the center as well. 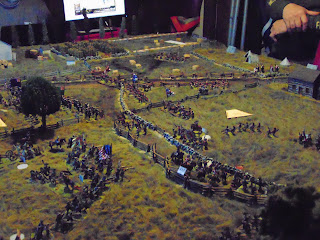 We now have big hole in the center of our line. 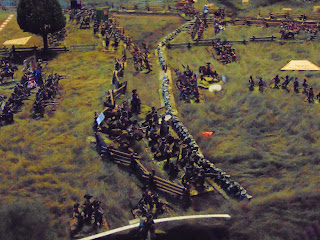 and my right most battalion is struck form behind by the 16th Lt. Dragoons and is quickly scattered. 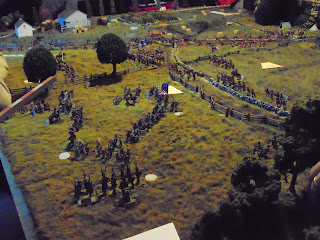 We manage to establish a ragged line of defense. 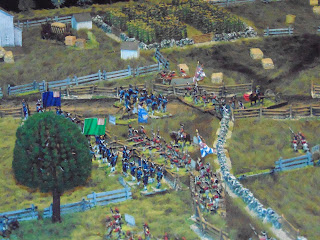 The continentals on the left make a brave effort to stem the tide but it fall short as the militia units on the right have been battered too badly with 4 units and one battery routed from the field our our army moral breaks.  We had some 40% of our army put out of action adjusted to 25% by the second day when those scatted by the cavalry charges return to their units.  It was a fun scenario and think Rich has learned what he needed to balance the scenario better for the Convention.
Posted by AdamC1776 at 7:31 AM No comments: 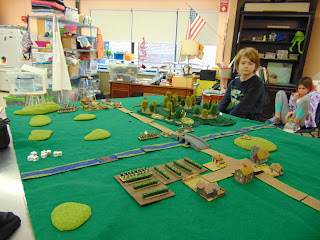 I used the St. Ulrich scenario in the Honors of war book as a starting point but made significant changes. The Grand Duchy of D'Argent is the defender with a brigade of two infantry and one light artillery battery. They also have 3 independent units Two light infantry and one heavy artillery battery. The attackers are the Draconian Empire:  They have one independent light infantry unit, a brigade of two cavalry units and an infantry brigade of 3 regiments and a field gun. 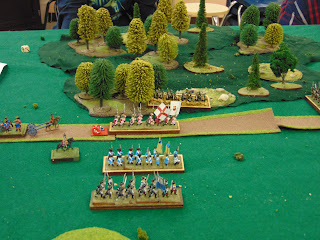 The Chasers de Montana made quick first turn ambush before the Darconian Boarder regiment turned their flanks and drove them away from the main column.  A running battle between the two units of light troops would continue for many turns. 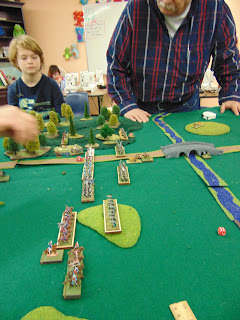 The main lines closed in on each other the D'Argent brigade having elected to advance forward a bit while their Jager battalion has come up on their left to slow down the enemy cavalry. 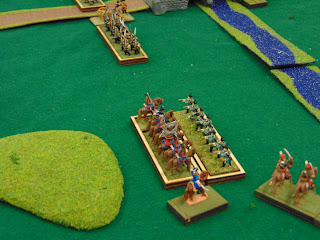 The Dragonian Cavalry quickly send the quick footed Jagers running. The manage to make it back across the river with but was a near thing. 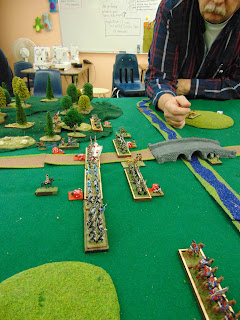 Both lines of infantry open fire the initial exchange works to D'Argents advantage as the Sheppard regiment is hit hard by musketry and grape break for the rear. 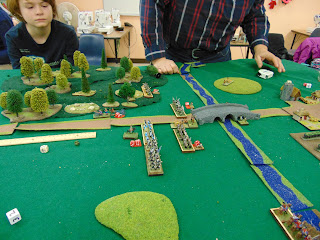 Rock and the Artillery unit batter each other resulting in both units falling back.  The Haydenberg regiment is scattered by musketry and grape... while the Draconian cavalry cross the rive. 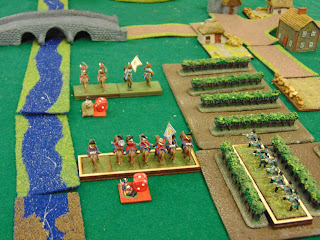 Both units take fire from the Jagers in passing but one of the units of Sappers working to demolish the bridge panics and runs. 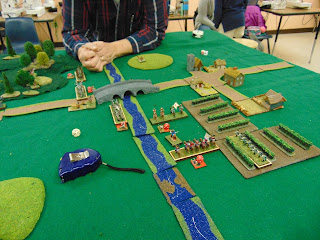 Regiment Pain of Daconnia charges into regiment Marini driving it back in disorder but at the cost of its own cohesion as its devastated ranks break up. 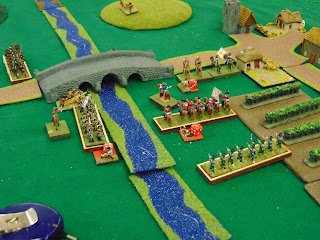 Artillery fire shatters the Draconian Hussars as the second unit of Sappers blows the bridge ending the game.  The D'Argent Jagers scramble through the vineyards ahead of the Draconian Dragoons and hold out in the village until the rest of the D'Argent boarder guards can get organized, cross by the fords and drive the dragoons off.  The Draconian main body comes up latter that day and crosses except for the heavy baggage which must wait for a new bridge to be built.