Saga Irish and Vikings battle in the Sacred Forest 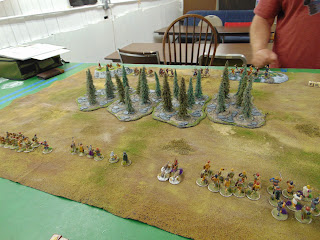 John and I met for our first game in a long while.  John had found a cool scenario called the Sacred Forest so we decided to give it a go.  I had Irish with Brian Boru, two champions, 4 Hearth guard, two units of 10 warriors, a short unit of 4 wolf hounds and the Gael-Gahie (SP check). John had Vikings under Ragnar with 4 Hearthguard, 4 Berserkers, 8 Warriors, 12 slinger and... 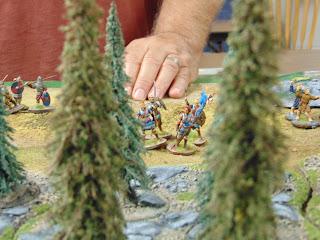 a unit of Shield maidens. 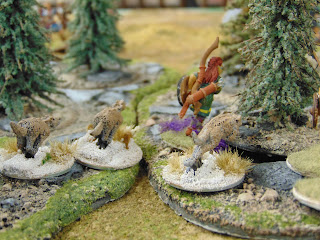 The Bad Squido huntress got her first game leading the dogs... as we both rushes for the forest (if you have more troops in it than your foes at the start of your next turn you get extra points. 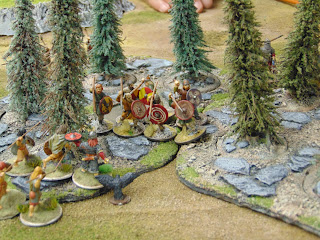 So there were lots of double moves early on and the red shield champion is trailing one my new fatigue markers.... 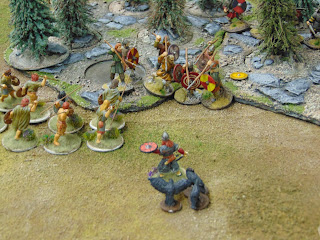 John's warriors out did him in combat and soon he has a whole murder of crows fallowing him. 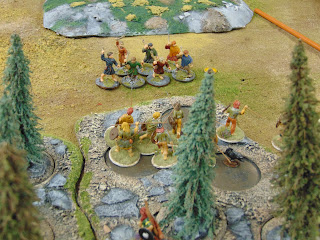 MyForeign Gaels  and warriors push froward and drive back the viking slinger... I didn't get them below six but they are out of the forest and to scared to come back. 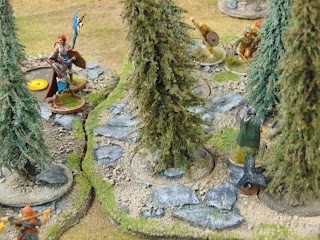 Units start piling up in the forest and in the mid game I didn't take as many pictures as I should have.  John's Warriors had a really good day.  Killing red shield  and forcing Boru to "run" for his life.  I killed of John's Bersekers getting two with Sons of Dana and then the other two fell to my warriors. Ragnar's Hearthguard killed Boru's Hearthguard. 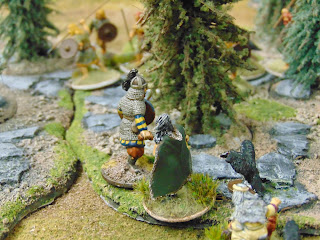 My Green champion managed to kill the last Hearthguard but died in the battle himself.  Boru faced viking warrios... 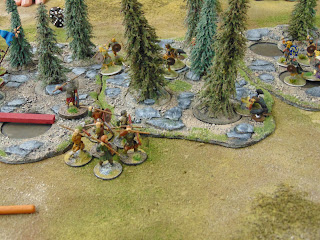 He survived but was defeated and made his single biggest move of the game.

The Foreign Gaels battle Ragnar... they almost get him... 4 of them die but they exhaust Ragnar. 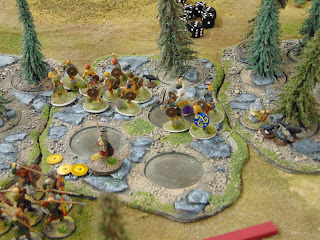 Ragnar used some battle board abilities to reduce his fatigue and charged in he hit them hard but with the eye for an eye ability... 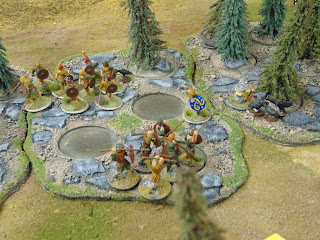 They manage to kill Ragnar... though only one of them survives. 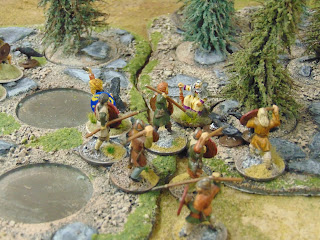 John took a shot at Borue who was exhausted... but I had Blood of Kings and Heart of Ireland both working... so he would still be able to cancel two hits. He also rolled a six on his one die getting three hits (two from Heart of Ireland) 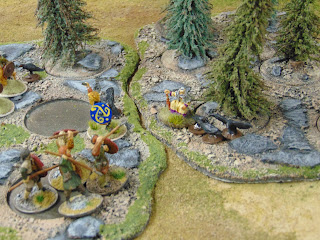 Boru survives by the thinnest margin... he even got two kills out of the fight (watch out for old men with swords!!!) 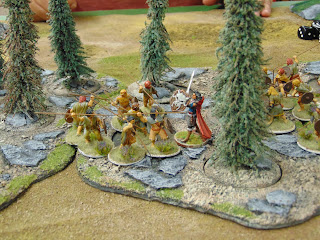 The Shield maidens also fall.  I won this one but a score of 9 to 7.   I like running Boru but he has some real down sides that I am not sure are balanced out by his liablities... the short unit of wolf hounds probably wasn't a good idea I have to consider getting more or going with more warriors.


So the results are not quite as listed above.  Review of the rules indicates that the use of Heart of Ireland was incorrect as an exausted warlord cannot use resiliance .  John has written up the respsults and a review of the sceneario here The Sacred Forest John won 10 to 9.
Posted by AdamC1776 at 1:30 PM No comments:

Not long ago I got the Bad Squiddo Kick starter the figures are Great and Annie did a great job keeping us up to date on all the numerous challenges she faced delivering and still got the figures to me in less than a year (orther companies could learn a thing or to about running kickstarter from this one woman operation).

I picked a few out to start with.  This lass with a sling isn't really painted in Dark Age colors but her hair-do suggested one of my favorite female characters so I painted her to to match. I call her Princess Skyslinger...

I mean seriously... give her a blaster and we are ready to go. 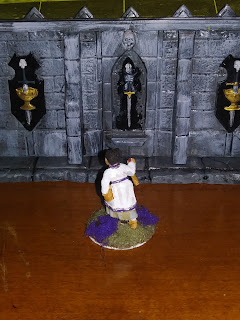 I tried to use silver gray to give the white a little shadowing... it cam out OK but not perfect 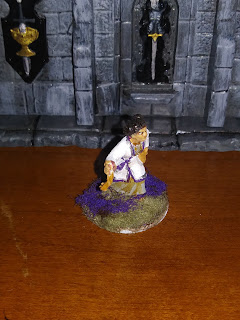 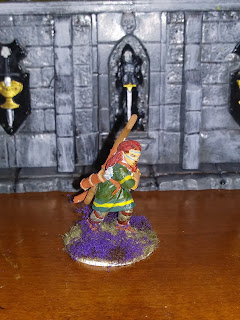 Next up is one of my favorite of the sword woman.  I'm planning to use her with my Irish wolf hound.  I dressed her in green as befits a huntress. 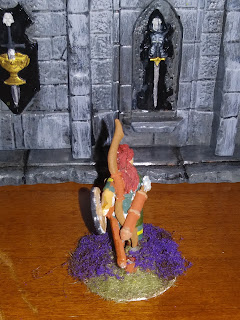 The Bow is from the Reaper Bones III weapon sprue and the quiver is from the Wargames Factory box set.  I figures a bow made sense for a woman hunting with dogs.  She'll make a fine addition to an archer unit or an archer or ranger for Frostgrave so I should get a lot of use out of her. 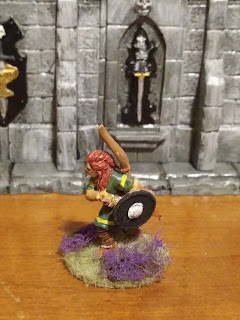 I used one of my Irish Buckler type shield rather than the one she came with since it seemed to fit better with characters who uses both a bow and sword. 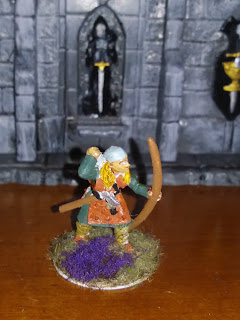 One of Annie's archers.  Great figure with the suggestion of motion (the whole set has a dynamic quality to it with out being over the top). 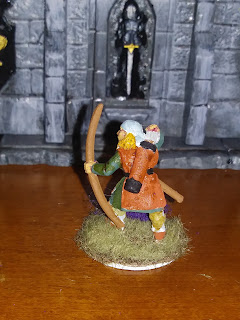 There are studs in the leather I might hit them with some bronze or gunmetal paint but I sort of like the look as it stands so I might leave it as is.  I like how she has armor (as sort of brigendine)  over her ordinary clothing like woman responding to an attack on her home village. 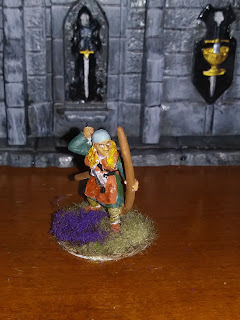 Annie uses axes more than I would but here I think it works suggesting a woman who isn't primarily a warrior (though clearly she is familiar with the bow).  The axe is a tool brought along form home as a secondary weapon.
Posted by AdamC1776 at 7:14 AM No comments: 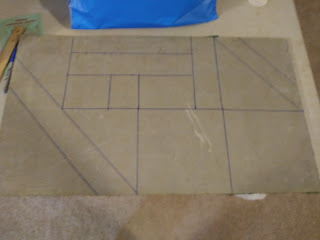 This past weekend my wife and I went searching out yard sales.  Its something we both enjoy doing when we have a spare weekend and every once and a while you find a nice gem.  This weekend I found a door mat in great shape and it was in the "free pile" so I grabbed it enduring my wife's eye rolling at my reason. 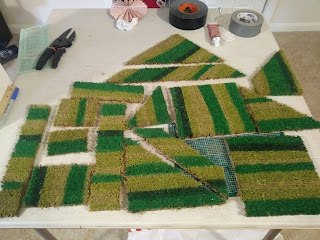 I cut it up during Evelyn nap on Sunday and now I have all the fields I'll need for 15mm games.  In a pinch they could work with 28mm figures though they would be little low for that.  Most folks use a straight yellow brown mat but I think this multi color mats are great for fields.
Posted by AdamC1776 at 10:58 AM No comments:

Email ThisBlogThis!Share to TwitterShare to FacebookShare to Pinterest
Labels: Terrain 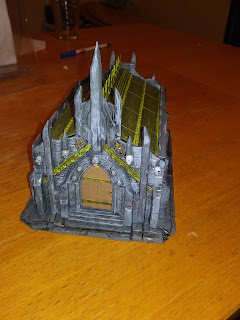 This was one of the pieces that got me to take part in the Reaper Kickstarter Bones III.  Its a great light weight plastic building that will go well on many tables. 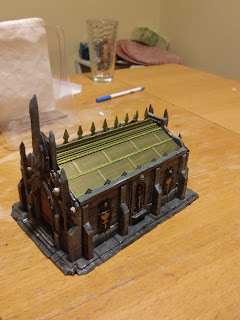 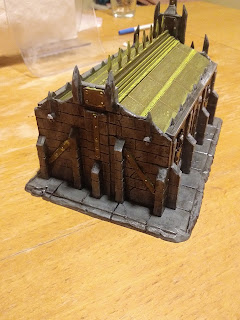 The roof came out great I did it in bronze because the sculpting looked metallic to me.  I then created a yellow green wash to make it look tarnished. 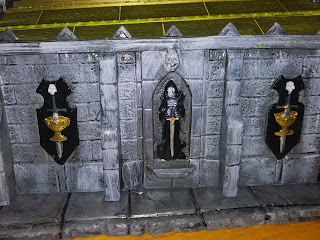 The sides I did in Black, gold and silver bright and shiny 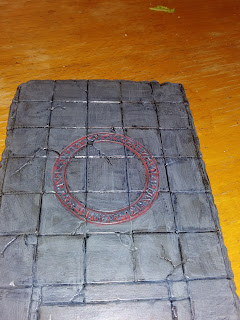 The floor is done with a darker wash and less dry brushing. I did the circle with red to make it a bit spookier. 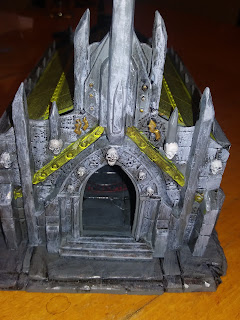 The opening door works great I wish they had put similar thought it the roof.  It slots into place well enough but it doesn't lift out easily which will be a bit of a pain on the table.  The large number of sculls gives this a bit of Game Workshop look but that's a minor flaw.
Posted by AdamC1776 at 7:06 AM No comments: