Merry Chirstmas to all! 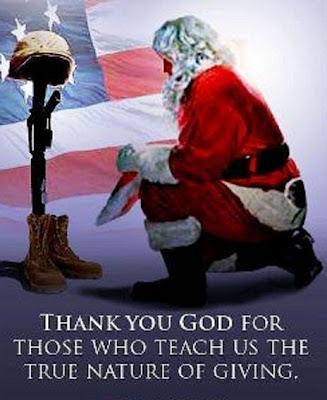 So my First German Army was Falsherjages. I figured as nother light infanty froce they would make a good foil for my free french and on this they have generaly delivered. I about 4 years of playing them I have done a death from above mission... Chris and I decided it would be fun and Gordon supplied an Air Field for us to try to jump into, sort of a Battle of Crete set up.

I do not know if I will do another Death from above. 1) it took too long to set up and 2) I got my ass kicked and it had very little do do with Chris's normally very high standard of play. (Don't get me wrong Chris played a good game but he could have played a bad one and I would been beaten just about as badly.)

Trouble started when one of our infantry Platoons jumped off board, as did a squad from the other platoon. My pioneers came down ok but they Heavy mortars all got hurt in the sudden stop and my other support platoons were out of the game because their containers landed among Chris's HMGs!

Chris got reserves who quickly started rounding up my suport units, my Light Gun Pltoon bork and ran and my Mortar and AA gun platoons just died.

They Chris got his battery of 25Lbs to show up right behind my pionneers and my Rifle teams! 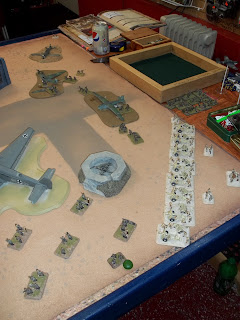 This is the before picture... 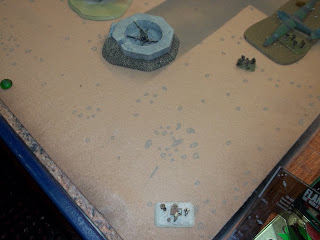 and this is the after.

With that I was making company moral check and even with fearless you should lose those eventual... that happend two turns latter... I lost another platoon and had my lost platoon show up by then but the game was already over.

This was one of my worst defeats in memory, and that includes my attack on Gorden's Italian a few weeks ago.

Finally we are at 1250 points in the league and this is the current make up of Panzer Kampfgroup Von Carriere. 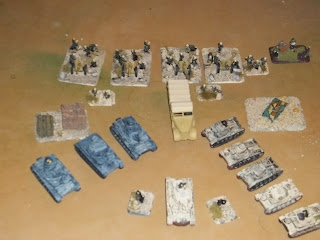 So the rumors are finally confirmed. Take a look here http://www.youtube.com/watch?v=_WRPM9pY3dA&feature=youtu.be if you have not seen it. (you may have to copy past that I have trouble with links for some reason. Now if you have been following the rumor mill this will not tell you much more than you already know but at least many things have been confirmed.

Battlefront is a great company they are providing free Mini rule books to every one who has a current hard cover. I am thrilled to hear this even if I do not get one of the free books.

I got into FOW though the Open fire Set so I have the mini book and Das Book I had considered upgrading but the rumor mill made me hesitate. I look forward to seeing what they have come out with.
Posted by AdamC1776 at 11:13 AM No comments:

From the work Bench

Some items I have been working on for the escalation league that I brought for show and tell at the basing clinic. The event was very casual but I picked up some good trick and saw some great products from Gale Force 9 that I will have to pick up in the new year. 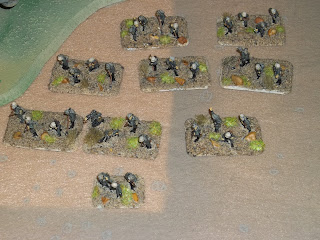 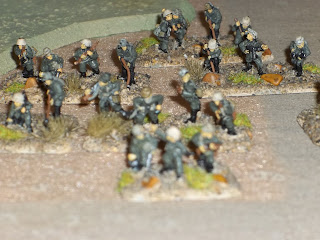 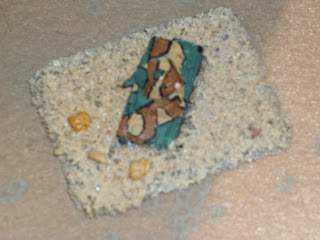 My new objective for our Desert campaign a French R-40(R-35 with a modified turret) stuck in the sand... 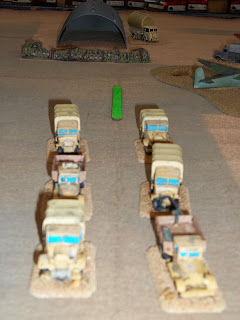 The ugliest collection of motor transport in the world. I used a mix of Italian, British and Russian vehicles hey the Zis truck is a Ford there had to some of those in Africa that got pressed into military service.
Posted by AdamC1776 at 7:34 AM 1 comment: 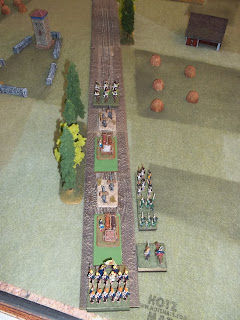 Sunday we gathered at Adler hobby for a game of Black powder. Don and Gordon played the Prussian who were trying to get their supply convoy off board while AJ and another fellow (I am very sorry I forgot your name) commanded the raiding Austrian force.

The First battle went the Austrians way they moved up quickly on the first turn while the Prussians only got their free moves for being column. 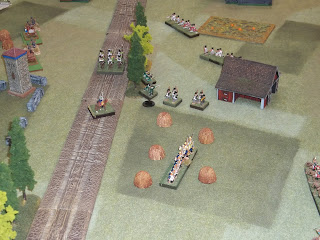 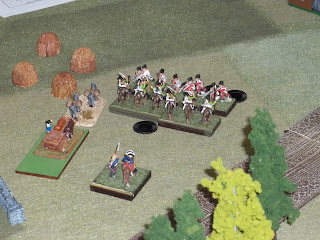 We had enough time so we reset and tried it again. This time the Prussians had better luck with command dice and Austrians had poorer luck (AJ was unable to move any thing for one turn a huge problem for his side).

The Austrians did manage to get two of for transports before the Prussian Dragoons arrived after that Austrian fortunes to a considerable turn for the worse. 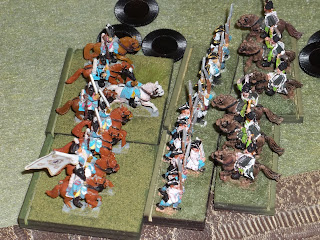 First let me thank all of the membership of the leagues I was pleased and flattered to receive the Sportsman Award for the last round of the league. I used my free blister to pick up a recovery vehicle that I had been eying, so don't worry the results of your vote will not be shooting at you. 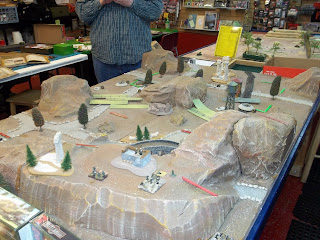 Chris and I were the only players last night so after a quick dinner we set up on a glorious board that Gordon had prepared.

Chris was playing his first game with his new Toburk force and frankly made some miss calculations that hurt him. Chris set took advantage of the terrain to set up two kill zones but had to hold the other three of his five platoons off board in reserves this was the result of the miscalculation I spoke of. Chris had an 8 gun battery of 25 Pounders but although the two 4 gun sections operate as two separate platoons once on the board they deploy as one platoon.

I advanced on the closest objective Chris used his AT gun pits to kill two of my panzer IIs. I had no luck with shooting that turn. My Artillery had nothing to shoot at (except for Chris's 2iC and that seem ungentlemanly) so they stayed quiet.

Turn 3 I a was able to take out one of Chirs's AT guns and maneuver my tanks out of range of the other gun but we were held back by one of my tank hitting a mine (I did make the armor save). 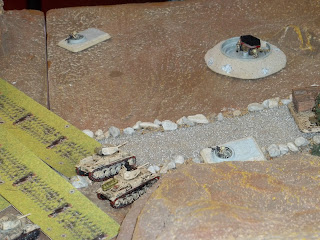 Also in turn 3 Chris's artillery arrived and he double timed them trying to get the command teams near enough to contest the objective. My artillery finally had a target on Turn 4 so while while my Panzer IIs advanced on the objective my Artillery took out two of Chris's guns and my Panzer IVs also tried to bombard but did not get any hits.

That gave me the win when Chris's artillery was unable to kill one of my Panzer IIs.
Chris was a gentleman about it but but I think both of us would have liked a "do over"

Chris also unveiled his new objective marker a lovely recreation of an actual event. The visit of the Free Polish leader General Władysław Sikorski to Toburk. 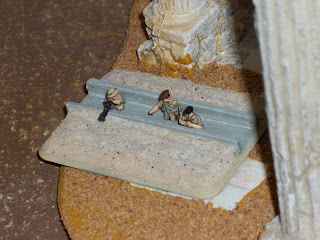 And here is the picture that inspired him 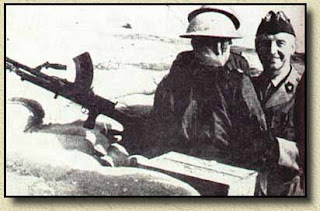