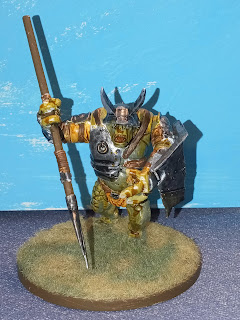 Some additional pick ups from the Gamer's flea market last fall and its one of my favorites I went with the armored version rather than the unarmored Moria version. 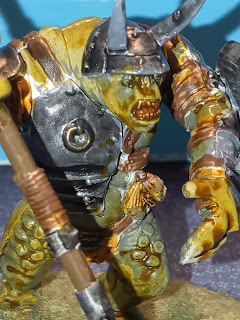 The trophy's hanging from his armor harness was a nice touch a call out to the terrible missiles fired into Gondor in the book (though not in the movie, I guess a rain of severed heads was too visceral for Peter Jackson) 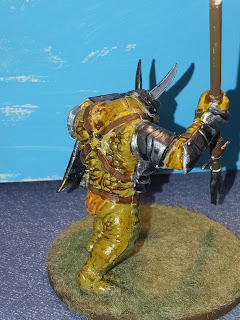 This fellow has an interesting scaly skin it seemed a bit lizard like. 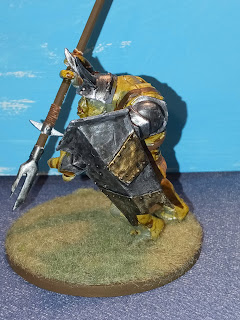 The patched up shield is one of my favorite bits I did the patches in bronze instead of steel. 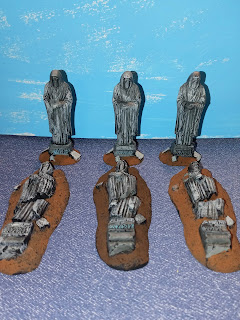 Six Sutures that are also from the same set three standing and three fallen statues. 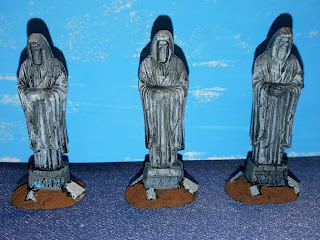 I kept the palate simple, dark grey, black wash, light gray dry brush. I added a little light blue in the deep part of the base where decoration or writing might once have been. 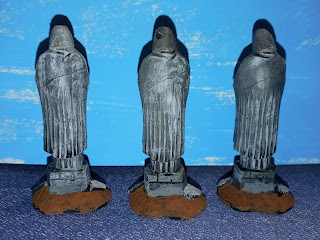 Rear view of the statues not much to add here. 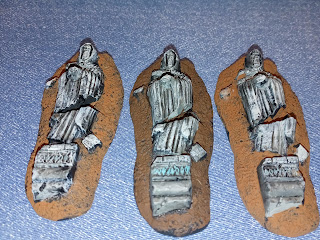 The fallen statues can either be used in conjunction with the standing statues or I could replace them as battles occur resulting in the fall of a statue.
Posted by AdamC1776 at 10:36 AM No comments: 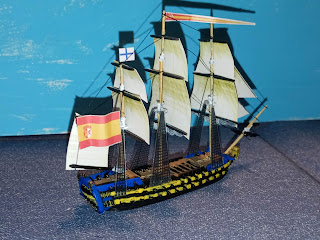 Another naval offering the San Justo from the Spanish Ships of Renowned set. (For a better history see JJ's excellent blog) She was built in 1779 and took part in the Spanish actions of the AWI including the the siege of Gibraltar. 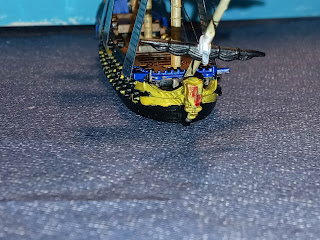 Her figure head is my best effort at something like the Spanish arms. After the American Revolution the San Justo was put in ordinary but was refitted in 1790 as a result of the Nootka crisis 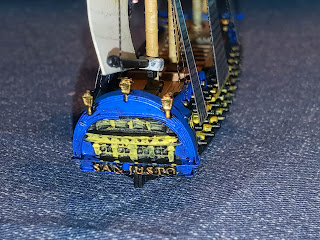 She was put back into action for the Napoleonic Wars though as with other ship in this collection her actions where hardly glorious. Indeed it seems that the San Justo was unengaged at Cape Finisterre and barely fought at Trafalgar. She was one of the 11 Ships of the allied fleet to make it back to to Cadiz.


A 3rd rate is 15 points and despite he lackluster combat record San Justo is certainly a Nautical entry so I should another 20 points for Perelandra.


A fine looking vessel even if her battle record hardly makes a ship of renown! Excellent work on the rigging and stern gallery.
Posted by AdamC1776 at 9:21 AM No comments:

Well its been a long time since I had a post possibly my longest time between posts in any challenge. First my wife and then my daughter and I came down with covid killing my painting time (and painting ambition even when I had time). 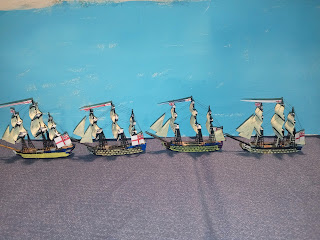 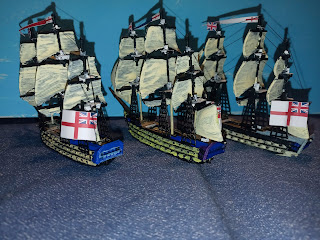 The first three are Simon Mann's generic 92 gun ship of the line. It's a fine model I only needed to add some figure heads. 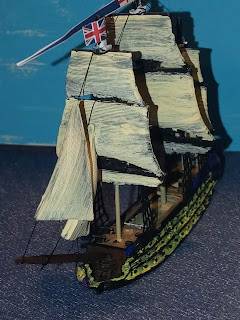 HMS Queen with the blue ensign 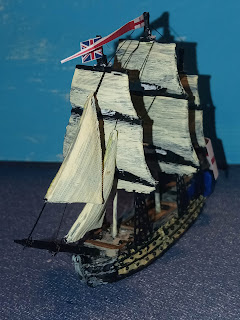 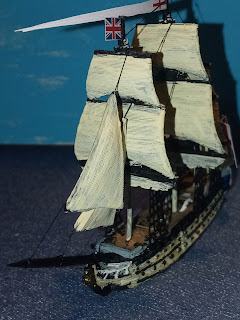 HMS Prince of Whales with the White Ensign. 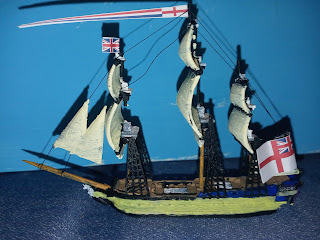 The last ship is Henry Turner's 98 gun London the model isn't quite as sharp but with some leftover pieces from the Warlord 3rd rates it looks pretty good. 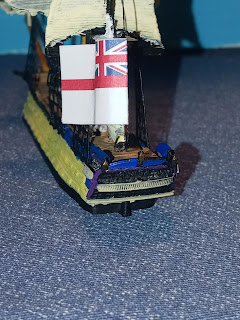 Ok so how do Royal Navy ships count as "Imperial" well I have two strings to that bow. First the Royal Navy was obviously the keystone of the British Empire. People respected the British Empire because even if you managed a short term victory on land the Navy would come sailing over the horizon at some point and bring in more troops and firepower than you could handle. Second the Imperial Navy of Star Wars was clearly modeled after the Royal Navy. This is clear from the upper crust vaguely English accents and mannerisms of it's officer's.

Okay points four 2nd Rates ships of the line should be 25 points each for 100 points plus another 20 for Coruscant (if Peter agrees). This should add another squirrel point. It's good to be back in the game.
One more thing for those who are not friends of mine on face book. We are expecting our second child this summer (July) Evelyn is excited as you can see though she was a little miffed at getting a baby brother instead of a baby sister. She has gotten over her most of her disappointment I am happy to say.
Posted by AdamC1776 at 9:07 PM 1 comment: