OK so the Folks at Adler hobbies (see G dog's blog) are starting to get into Napoleonic and the black powder new England forum has been buzzing with the discussion of how to get started.

I thought I would share my own incites. I'm not writing with any particular system in mind.

Battles in the black powder era are big, it doesn't really matter if we are talking War of Spanish Secession, Seven years war, Napoleonic or American Civil war.

There are two approaches on one end is V&B my personal favorite game because you can portray an army. Each stand is a multi-battalion Regiment or Brigade representing one to three thousand men. I'm not going to address this system at all in this particular article. (I may write something up on this as well)


Most other system have multiple stands per battalion or brigade, This is the case with Black Powder, Might and Reason, Age of Reason and Rank and File (just to name a few I have some knowledge of).

Some folks coming from games like Flames of War may be initial confused because in Flames of war you can start off with an HQ and two platoons and start playing buy like 8 tanks and off you go.
In black powder its Rock, Paper and Scissors an all infantry force will suffer badly at the hands of some one with Infantry, Artillery and Cavalry so you want some of each from the get go.


So get that HQ usually one or two officers on horse back you are going to need him.

Infantry is the basic building block of armies in this period,(in any period some would say) yes that box of Guard Cruisers looks sexy but it may not be what you need, you will need some solid regular infantry. In my opinion you want enough for between two and three units of infantry to start. This is because generally speaking two to three battalion make up a regiment or brigade and two or three regiments or brigades make a division of infantry.

The above is an extreme simplification but it works as a starting point.

After regular infantry I would recommend getting some Elite infantry. In most cases Grenadiers are the way to go but in some armies you may be better served by some light infantry type. If your not sure what will suite your army best or if getting these guys means buying another expensive box of miniatures hold off.

So that's your infantry force 4 units at a maximum! How many figures that will be is going to vary but if we assume an average of 16 per unit(Black Powder recommends 4 infantry per 40mm x 40mm base and 4 stands per unit, if memory serves) that's 32(if you go small with two infantry units)to 64 figures (if you go with 4 units)

Artillery get one gun stand ready make it a light or medium gun if you can. You will probably have to buy more than one gun in a set or several players could buy and split a set if money is tight.

Cavalry in the black powder era comes in three flavors Heavy, Medium or Light. For your first cavalry unit I recommend going with what ever the army you are portraying had the most of. In most cases this will be Medium or Light cavalry. If you can get a Light Cavalry unit. They look good and most armies can benefit from having at least one unit of Hussars or light Dragoons. I would advise the novice painter however to go with a unit of Dragoons as their simpler infantry like uniforms will prove easier to paint.

Hope this information is helpful.
Posted by AdamC1776 at 1:10 PM No comments:

France and Austria at the Whiz 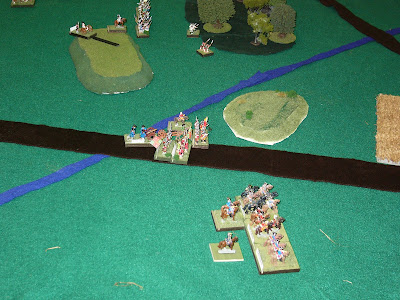 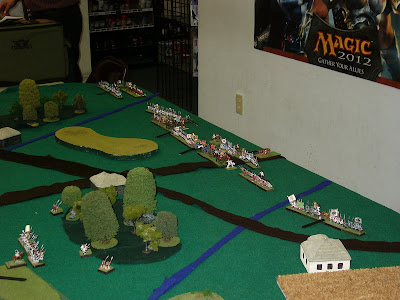 Once Again Tyler and I met to do battle. This time he had an Austrian Army of 11 Division and my French army had shed its Wurttemberg troops making it 12 divisions (I used the points saved to up grade several of my regiments form moral 4 to 5). Our scenario was that a French army was conducting a siege and I commanded the covering force.

The battle field was crossed by two roads one down the middle and one at an angle from the South East to North West corner. (East refers to Tyler’s side of the board, west to mine) Three villages run along the diagonal road the one to the south east was a farming village with a field in high summer growth and the other two abutted forests. Tyler got his pick of side and I rolled to move first.

We used the V&B Road to Glory deployment card system. This meant that once we were deployed we removed certain troops based on the card and they would return as reinforcements. Tyler had Echelon Left and I had returning detachment right. My army marched forward only to see Tyler’s Right Center and Reserve forces vanish at the end of turn 1! My left wing was similarly removed.

Now had I know Tyler’s center was phantom I would probably have rushed forward but instead I unlimbered both my heavy guns as I expected I would have to blast him out of the Center village.

Since my left was gone I sent Regiment Saintonge with two other regiments and artillery in support moving left around the forests it would take me two turns of dealing with my Poorly trained men to realize I could move my boys in march column… resulting in a French Infantry division more or less missing the battle! (FACE PALM!)

On my right the Irish Regiments of Claire, Buckley and Berwick crossed the ford and took up a position on a low hill. They were supported by three Brigades of French Heavy cavalry. Initially I looked at this as a holding action use two Divisions to hold down three.

On the right Tyler was again very clever moving his Cavalry Davison toward the center for two turns (causing me to follow them on the second) then swinging them back to charge after my cavalry was back behind the stream. My light gun was hit and took another disorder falling back across the stream but the Claire Regiment sent the other Austrian Cuirassier brigade tumbling back with heavy loses. Tyler with drew his horse since I had three new infantry Brigades and a field artillery battalion arriving to support the Irish.

It was in the center was where most of the initial action occurred. My troops advance hoping to take the cross road and the village, with an eye to taking the large hill the dominated the cross roads. My German Division as on the left with a field Artillery battalion , with Vieux Division in the center and the Swiss on my right supported by two heavy artillery battalions. Skirmishers infiltrated the woods and raced into the village.

Tyler’s center division returned at the start of turn two and his Dragoons and Hussars rushed forward backed by Grenadiers, Grenzers and other infantry! I had to move my infantry forward on turn three but if I did they would be charged by Austrian horsemen and would have to face them with out the benefits of being stationary. The Vieux and Swiss are the finest infantry in France and would be need to hold the line… So I moved them and then moved the Division of French horse and the Household Cavalry Division in front of my infantry line to screen them. I don’t know how the king will feel about my shedding the bluest blood in France to protect artillery men and infantry but the king is too far away to complain.

Tyler’s Hussars and Dragoons charge my Troopers on the next turn. The fight goes mostly my way as I win 4 of the 6 Melees that result. The Hussar Division of the Austrian army is exhausted and the Dragoons are bloodied enough that they fall back the next turn when my Cavalry fall back opening shots for the French Artillery.

The German Division mounts the hill and Vieux moves up to help as new French infantry and cavalry divisions arrive to their rear. The two weaker German brigades La Marke and Anhalt went back to back in all around defense (the V&B equivalent of going into square but for a brigade formation, so several mutually supporting squares) with the Alsace Brigade supporting the Divisions artillery.

Tyler moved his heavy horse into position but I attacked with my own Cavalry and both sets of horsemen got a bloody nose, though the French were hurt worse. Despite this the Austrian cavalry with drew. Austrian Light troops began clearing there French counter parts form the woods to the south of the center village.

About this time the Saintonge Brigade and its supporting units reach the north east side of the table and while not strong enough for an attack they did start to draw the attention of Austrian troops that way.

On my right Tyler sent his infantry forward into musket range 8 brigades of his infantry with 3 Artillery battalions against 6 of my own brigades and 2 Artillery battalions. The exchange of fire and a French counter attack with the bayonet resulted in damage to both side and exhaustion for one each of our infantry divisions. The French had 3 Cavalry brigades ready to try and exploit the damage to the Austrians while in the center the French were creeping forward taking ranging shots with artillery.

Had we had mote time the French Cavalry on the right might have burst between the woods and the stream and gotten behind Tyler’s army in the center. If they had things would have gone very badly for them. If that attack had failed his infantry might have done the same to me. Though I had two Cavalry divisions that I think would have given him pause. Still with both side having two divisions Exhausted the tie breaker goes to Tyler because his deployment had the lower victory rank.

Much like the last battle this one was very close and Tyler played well. Last time I think he would have won in the end… this time I think it would have gone the other way but we will never know.