Arofan has been taking some beer and pretzels ironclad rules and setting them up for remote gaming.

Arofan set up a Union attack on a Confederate harbor. The yankees planned to land troops and destroy our shore instillations. Ironclad hammer each other as small spar torpedo armed vessels maneuver for attack runs. 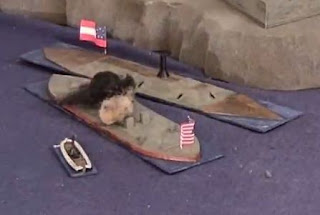 To the left the USS Monitor glances off the CSS Atlanta and both ships exchange fire at point blank range. The Monitor has both guns put out of action. 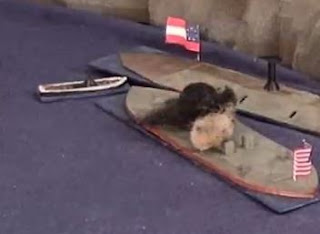 The Atlanta is rammed but the torpedo doesn't activate. 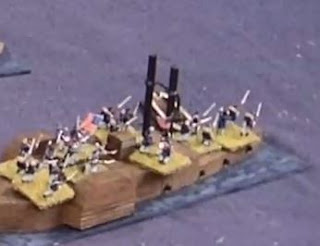 A Confederate launch rams the troop ship and it's torpedo goes off... The USS Tyler limps off as it's troops fire into the now unarmed launch. The Union fleet withdraws and the Confederate forces set about making repairs for the next attack.
Posted by AdamC1776 at 10:38 PM 2 comments: 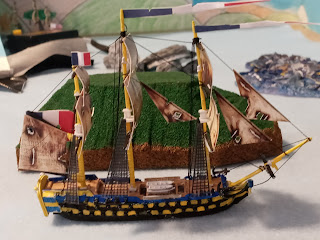 The French ship of the line Redoutable and her herroic crew for the Hall off Heros: Redoutable 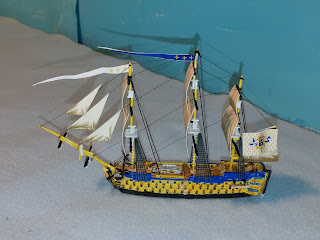 The French 1st Rate for the Lair of the Great Beast: Terrible 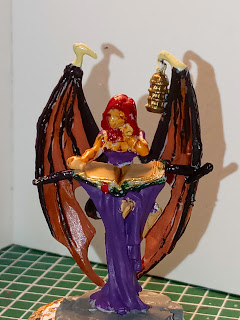 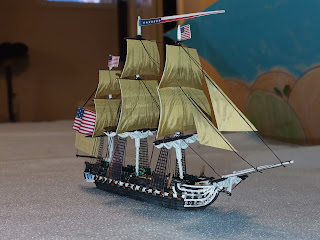 The USS Constitution for the Gallary of Ancestors: Old Ironsides 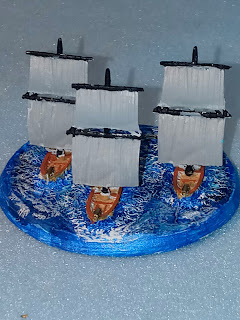 I'll post notes on the scenario design later but the basics are a group of American Privateers and US Navy ships have teamed up to attack a wealthy British Convoy. A squadron of French Privateers also joins the attack.

Frank's USS Boston cut across the front of British Frigate Lively raking her with a double shotted broadside then boards in the smoke. Paul's brig cuts across the stern and joins the attack the Lively taken from two sides she quickly strikes.

HMS Shannon fired one broadside but it's the best broadside of the game striking USS Constitution for 9 points and two critical hits fire and stearing damage. Captain Grenewald finds his carefully laid plans ruined so he grapples Shannon both ships are now burning and locked in hand to hand combat!

Meanwhile the French and American Privateers have spared with the smaller British escorts and are getting the better of it with the major British ships occupied they charge toward the merchant ships.

With fighting raging back and forth on the Shannon and Constitution Captain Sheppard in the Boston makes a desperate decision and fires into the grappled ships! His shot rakes Shannon hurting her badly some shots hit Constitution but she comes out ahead. With Shannon really the crew of the Constitution prevails!

With their Royal Navy guards falling the merchants begin to strike. An clear victory for the Franco-American forces.
Posted by AdamC1776 at 10:22 PM 2 comments: