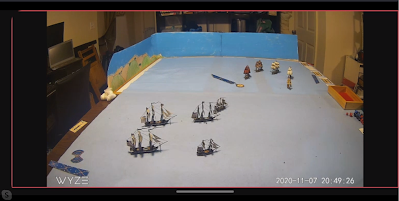 Our battle begins with all both sides maneuvering to obtain the "Weather Gage" The Sole exception being the USS Hornet who move straight forward in the style of "Leroy Jenkins!"

British Luck is bad this day as the wind shifts on turn two putting three English ships in danger of being in irons (facing into the wind).   Making Maters worse Congress and then Hornet Cross the T of Aeolis while President hits Shannon.

Hornet and Aeolis collide during the Aeolis's death throws.  Hornet is hard hit by Belvediera and takes no more part in the action but she survives and a frigate sunk for a sloop damaged is a good trade. The change of the wind has thrown the British into confusion as they must veer off and maneuver piecemeal. Congress cuts behind the Belvediera as President exchanges fire with Shannon.

Shannon carefully tack and closes with United States hurting her but taking damage in the exchange as Congress and President exchange long range fire with the rest of the English Squadron.

Shannon and Belvedere are both ripped open by the United states which sails between them and fires devastating broadsides out both batteries.

Shannon and Belvedira both strike President and Africa exchange long range shots as do Guerriere and Congress.  Congress takes a hit to her rudder but is still able to close with and force Guerriere to Strike.  Africa is too slow to escape and too weak to take on three damaged but still powerful American Frigates. The turn of the wind gave the Americans the best outcome yet in this scenario.