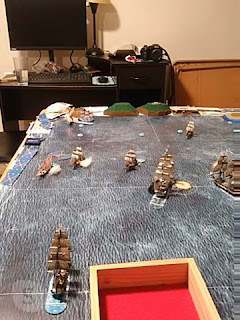 Saturday I was joined by my old friend Rob and my new friend Arofan for a slightly scaled down version of the same scenario from Wednesday night. Rob had the President and Chesapeake while Arofan and United States and Constellation. 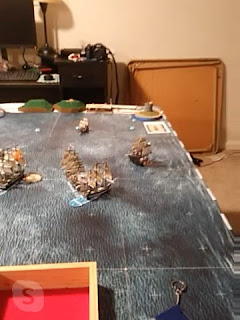 Rob wanted to capture the Corsair frigate Crescent. The Corsair landed a hit on the President taking a damage from a return broad side with gundeck critical. Chesapeake hit her with her chase gun getting a crew hit critical. 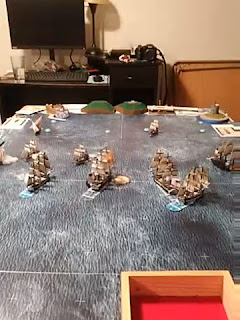 Corsair ships are steaming out of the harbor taking shots at the USN as they try to escape. Three ships fire on Constellation but damage is minimal. 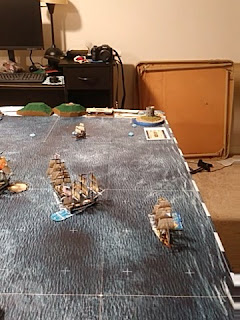 The Crescent slipped by the American frigates despite its damage it can’t fire this turn so running is its only option. 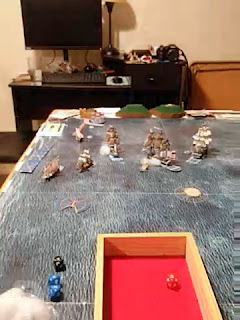 American broadsides smash brigs and badly damage one of the two Xebecs, the two fleets break past each other. One Brig and both Xebecs and the Crecent are able to escape. 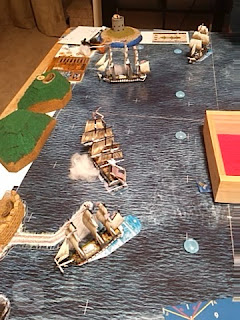 The United States anchors, she and Chesapeake unleash broadside on the Martello Tower the damage is minimal. Chesapeake draws the Tower’s fire buying the United States a turn of reprieve (The united states had been drawing its fire all game). The President opens fire on the battery in the old fort and blast its to splinters. 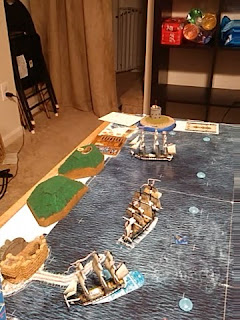 Three American frigates begin unloading Marines and blasting shore batteries with fire. Once ashore the Marines make short work of the local troops and secure the batteries form the land ward side. The Chesapeake finally must abandon her chase of the Crescent as she drops over the horizon. A Significant victory for the American nave though not by a great a margin as the victory on Wednesday night.
Posted by AdamC1776 at 10:04 PM