This game was from Wednesday Night I've been busy with dad and husband stuff, so I haven't had a chance to write it up. I adjusted this scenario from the main rule book. The US Navy needs to anchor three ships in the harbor for two turns. They also need to stop at least half of the pirate ships form escaping for a major victory. 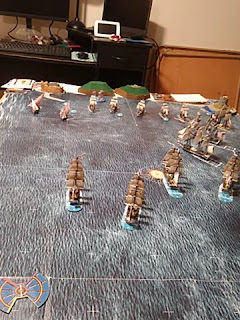 The United States Navy closes in on the Barbary corsair haven. Pirates scramble to get their ships out of harbor and out to sea. 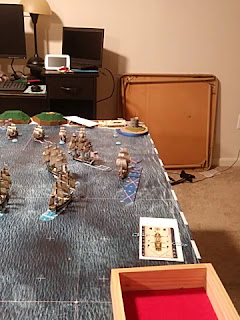 Mark and Dave in the USS President and United States lead the way engaging the Martello tower. The corsair frigate Crescent cuts across the stern of the United States but most of her guns miss. Franks ship Chesapeake moves to cut off the Crescent. 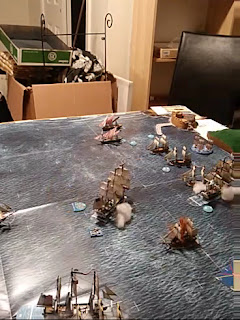 The action quickly becomes quite furious with Mark’s President cutting between two brigs (colliding with one) firing from both sides. A grappling effort fails. Dave in the United States blasts another corsair brig and lights it on fire. Frank in the Chesapeake blasts the Crescent with grapeshot and grapples the corsair frigate. 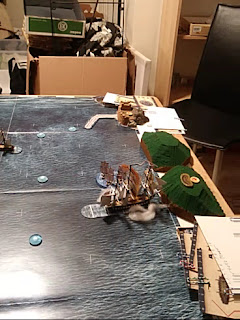 The President passes by the brigs and into the harbor and emergency anchoring maneuver stops her just shy of running around. She fires to port smashing the gun brigs, to starboard chipping at the masonry of the Martello tower and getting a lucky critical on the battery with his bow chaser. (gun ‘deck’ hit) 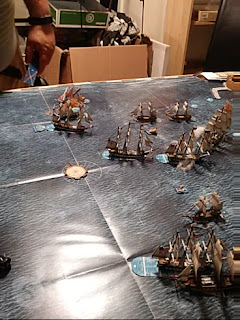 Further out to sea the corsair ships are running a gauntlet of American fire. The Xebecs and brigs get in a few good hits of there own but its an unequal contest. The Chesapeake secures the Crescent after a savage boarding action lasting two turns. Those corsairs refused to go easy. 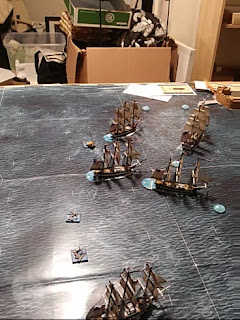 Two Brigs and one of the Xebecs escape the US ships glide into the harbor suppressing the two batteries with fire. The Martello tower continues to fire but they do not have enough guns to sink all the targets. The USS President will need an extensive refit and the USS United States will also need repairs. The Chesapeake will probably need drafts from the other ships or US merchants as she suffered significant casualties in boarding the Crescent. Of the other US frigates only, Boston took significant damage.  A major American Victory.
Posted by AdamC1776 at 9:06 AM