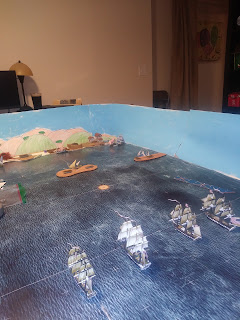 On July 24th, 1804 4 intrepid American captains: Robert Newis of the President, Joseph Lembo of the United States, Zax "God Save Congress" Small of the Congress and Jed Docherty of the Chesapeake, lead their ships and crews on a daring attack on a Corsair harbors somewhere on the Barbary Coast. 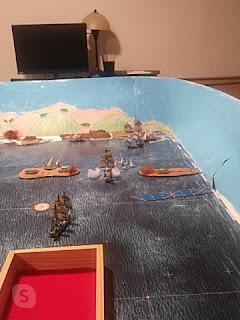 USS President leads the way through the north passage basting the shore batteries with both broadsides. USS Congress follows in its wake. 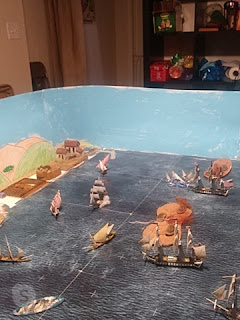 Corsair ships cross the Presidents T hurting her but doing not critical dameage.  The USS United States leads the attack on the South Passage taking out another battery.  Two Xebecs combine fire on her inflecting modest damage. 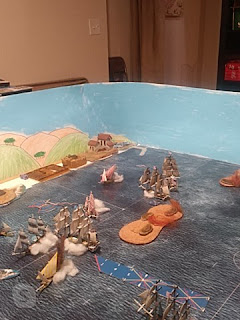 The President and Congress pass through the North passage they make short work of the Xebec thought it does manage a Raking shot on the Congress.  The United States pushes Though the South passage Guns blazing as every ship in the corsair fleet takes its best shot at her or the Chesapeake. 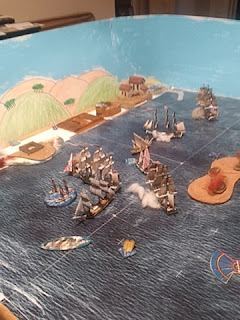 The Unites states Fire blasts one Xebec out of the water and forces a second to strike its color.  Then the United Stakes colides with the Corsair firgeate Crecenet then a squadron go gun boats and just comes up short of hiting another corsair Xebec.  Adding insult to injurty one of the shore batteries sets the United States a blaze.  USS Chesepeke blaste the Crecent... 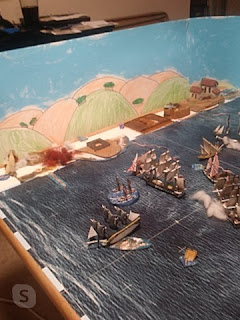 and she rolls over her deviated crew are unable to save themselves form running aground on the rocks. 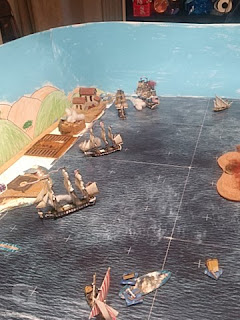 The American Ships Anchor.  Fire rages back and forth between the ships and the shore but the shore forts are getting the worst of it.  USS United States takes more fire and technically "strikes" but her marines are in their boats and the other US Frigates are in good shape a clear victory for the USN

Email ThisBlogThis!Share to TwitterShare to FacebookShare to Pinterest
Labels: Corsairs