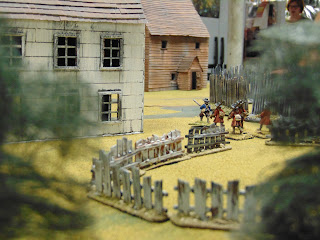 In the afternoon I took command of mixed force of French and Indians to burn a small English village. Dave Valentin ran this scenario based on similar raids during King Philips war.  The rules are from North Star 1672 (I believe) The have lots of special command and (mis)fortune cards that can have a major impact. 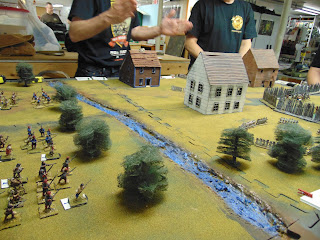 Our objective is to burn more than 50% of the house while the enemy wants to make us pay for it.  If we lose 50% or more of our troops we lose. I'm Teamed up with Dave's son Will facing Dan form my morning game and my old fiend Dave Soucy running the English 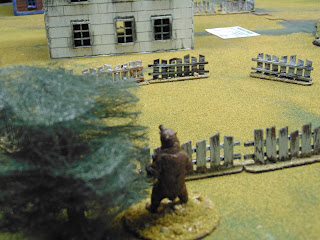 Will for reasons that escape me play the Bear attack card right off.... 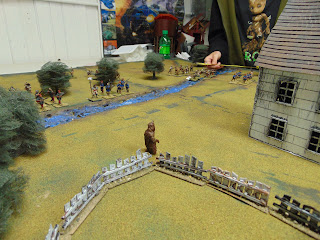 With no one in sight he wanders right into my path. 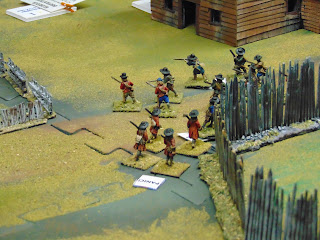 More productively I played a card that kept a unit form shooting (wet Powder) followed by one that caused the same unit to panic and run off.  This was good because the remaining unit hit one of my bands hard with a well aimed volley of musket shots. 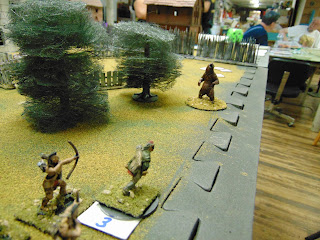 I'm forced to kill the bear it pains me to do this but he was protecting the English... 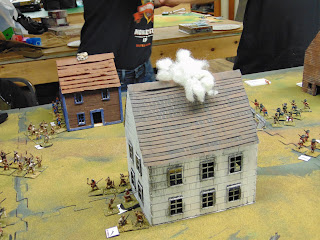 My men get the first house alight... wills men seem to have forgotten how flint and steal work and can't get the building in the distance to burn. 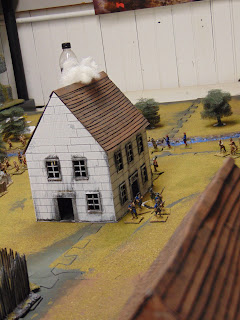 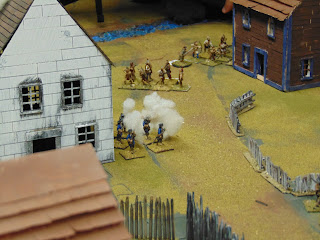 My men pursue and cut them down 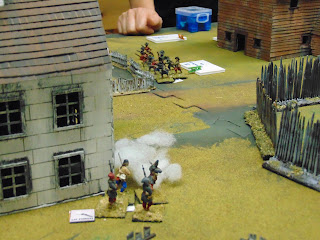 A long range fire fight opens up at this point.  Will is still trying to burn the second house and I don't feel I can go for the third with out his men to provide the English with a target rich environment. 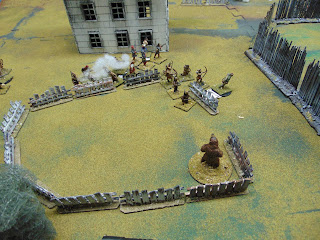 Oh Look another bear wandering out of the woods to attack us... Why brother bear do you fight for the English! 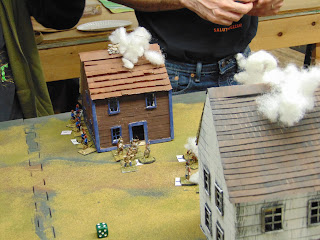 Will's men finally get their torches lit and advance! 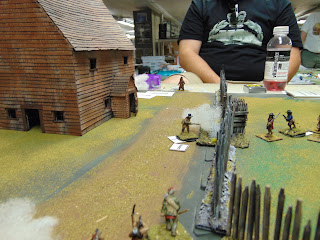 The exchange of Fire favors our greater numbers (at the point of contact) and all but a few defenders flee. 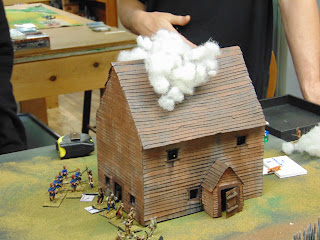 I saved some cards that helped us kill the defenders in the house and start it burning.  We came close to draw had we lost 7 more soldiers we would have been at 50%.  The English had a large unit of men holding their block house had they come out a turn or two earlier we would have been in trouble.  A very enjoyable game.  Will and I had a lot of luck on our side with good dice rolls at critical times... and exceptionally good luck with cards we drew (and maybe some small skill regarding how and when we played them).
Posted by AdamC1776 at 2:38 PM